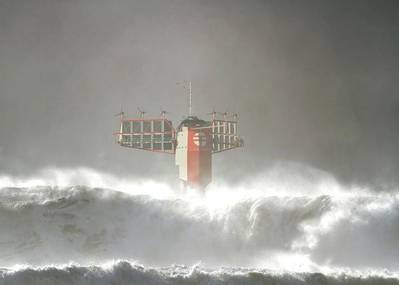 Ifremer, Jean-Louis Etienne and the entire Polar POD team announced its construction by the Piriou shipyards in association with 3C Metal, under the direction of the project owner, Ifremer. The scientific program of this international oceanographic "station" is being overseen by the French National Centre for Scientific Research (Centre national de la recherche scientifique, CNRS), in partnership with the French National Centre for Space Studies (Centre National d'Etudes Spatiales, CNES) and Ifremer.

What is the Polar Pod?
A cross between an oceanographic platform and a drifting lighthouse, Polar POD is one of a kind. It is designed to face the "furious fifties" and the highest waves on the planet. It will sail for three consecutive years with no planned return to land, which will require equipment that is easy to use, robust and tested. Environmentally sustainable, the platform will produce all the energy it needs using wind turbines, which will require very strict management of the vessel’s energy expenditure. The construction process started on September 1, 2022, and will continue for a period of 2 years. Several sea trials off the coast of South Africa will be required before the scheduled departure of the expedition from Port Elizabeth in South Africa in the last quarter of 2024.

What are the scientificobjectives?
Little is known about the Antarctic Ocean due to its size, proximity and harsh living conditions. Driven by the Antarctic Circumpolar Current (ACC), the Polar POD will circumnavigate the Antarctic Circle twice, making it three years of an uninterrupted campaign with the following main objectives:

When did the Polar Pod Project Start?
In the works since 2016 when Ifremer was appointed as the authority in charge of the construction of the Polar POD, the last six years have been spend completing the preliminary designstudies with the French marine engineering firm, Ship-ST, to verify the technical and operational feasibility to public investors. Time was also required to develop a scientific program under the leadership of the CNRS, clearly define the specifications of the instrumentation to be integrated on the Polar POD, start the bidding process for potential shipyards and to seek funding.

The construction of the Polar POD has received funding from the French government under the management of the National Research Agency (Agence Nationale de la Recherche) under the future investment program integrated into France 2030, an investment plan which focuses on sectors of France’s industrial future by the year 2030).

What are the partners saying?