US Recovers Warplane that Fell into South China Sea 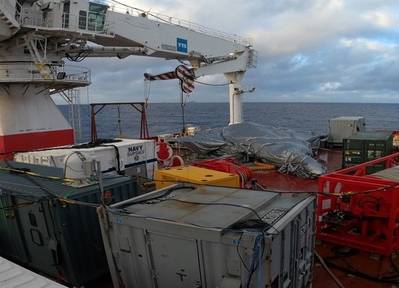 The United States has recovered an F-35C warplane that fell into the South China Sea in a landing mishap in January, the U.S. Navy said on Thursday.

The wreckage was recovered from a depth of about 12,400 feet using a remotely operated vehicle to attach rigging to the aircraft, which was then hoisted up by a diving support ship, the U.S. Navy's 7th Fleet said in an email.

It will be delivered to a nearby military installation to aid in the ongoing investigation of the incident, the statement said.

"The recovery effort shows the U.S. Navy commitment to its assets, and a free and open Indo-Pacific," it said.

Seven U.S. military personnel were hurt in the January accident on the deck of the aircraft carrier USS Carl Vinson, which had been conducting training in the strategic South China Sea, much of which is claimed by China. read more

The Navy had previously brushed off media reports suggesting there were fears the aircraft could fall into the hands of China, which said at the time that it had no interest in recovering the warplane.

Bollinger to Build Uncrewed Mine Countermeasure Vessels for the US Navy

Lockport, La.-based Bollinger Shipyards earlier this month was awarded a U.S. Navy contract for the production of the Mine…