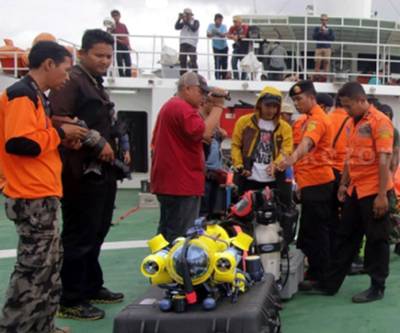 Members of Indonesia's national search and rescue agency Basarnas on board the search vessel preparing to deploy their JW Fishers ROV. (Photo courtesy of JW Fishers)

On December 28 AirAsia Flight QZ8501 left Surabaya, Indonesia bound for Singapore with 162 people on board. Forty six minutes later, the plane disappeared from radar. Air traffic control said it lost communications with the crew somewhere over the Java Sea. The flight path took the Airbus A320 between the islands of Borneo and Sumatra. For three days, 30 ships and 21 aircraft from Indonesia, Australia, Malaysia, Singapore, South Korea and the United States scoured the area. On December 30, it was confirmed floating debris had been spotted, along with several bodies.

An international team was assembled to recover the victims and find as many pieces of the aircraft as possible to allow a thorough investigation. The 100-foot water depth allows for divers to be used in the recovery work alongside remote operated vehicles (ROV), however strong currents and high seas are causing delays. The operation is being led by Indonesia’s national search and rescue agency, Basarnas, who is getting assistance from teams in Singapore, Malaysia and Australia. Basarnas recently acquired several of JW Fishers ROVs and side scan sonars, along with diver-held video systems; essential pieces of equipment for this type of underwater search operation. One of the first instruments to arrive on site was a side scan sonar, which was able to confirm pieces of the aircraft were scattered on the seafloor. ROVs were the next to be deployed. The remote controlled underwater camera systems can stay submerged all day and all night, without any concern of decompression, running out of air, being cold or tired, like divers must deal with. The ROV is also equipped with a scanning sonar, which is like radar for underwater use. The sonar can “see” much further than the vehicle’s video camera, and can scan an area more than 300 feet in diameter around the ROV. The scanning sonar produces detailed images of any objects lying on the ocean floor.
One of the primary objectives of the mission is to locate the plane’s black box flight recorder which contains complete details of what was happening on the aircraft, up until the time of the crash. The black box is equipped with an acoustic pinger, which began transmitting a sonar signal when submerged. A gun-like device called the pinger receiver is used to detect the sonar signal being emitted by the pinger. The receiver can either be mounted on an ROV or carried by a diver. Singapore military divers equipped with JW Fishers PR-1 pinger receiver are waiting for the weather to break so they can locate and retrieve the black box.
• Singapore • Indonesia • Australia
Email