RE2 Robotics is Developing Manipulators for the US Navy 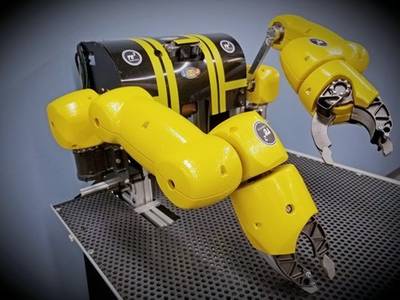 A developer of humanlike robotic manipulator arms has received a $2.5 million contract from the Office of Naval Research (ONR) to continue development and commercialization of its Dexterous Maritime Manipulation System (DM2S).

WBIEDs and mines pose a significant threat to vessels, bridges and ports, and when placed in congested areas, such as bridge pilings, they can be particularly difficult to access and defeat. Recognizing the inherent dangers present in the detection and inspection of WBIEDs, there is a critical need for robotic systems that can perform EOD tasks with the accuracy and speed of a naval diver.

"As with the majority of our robotic technologies, the goal of the DM2S is to keep humans out of harm’s way while performing dangerous tasks. DM2S provides Navy EOD personnel with the ability to address threats like WBIEDs from a remote location, such as from a ship or on land,” stated Jorgen Pedersen, president and CEO of RE2 Robotics.

RE2’s dual-arm DM2S is capable of easily integrating with underwater vehicles already in use by the Navy, eliminating the need for the military to purchase all new robotic systems for underwater operations.

"The compact, efficient, human-like capability of DM2S is conducive for integration onto autonomous underwater vehicles so that they can perform longer-duration autonomous inspection and intervention tasks,” stated Jack Reinhart, Director of Product and Project Management. “In addition to defense applications, we are actively pursuing commercial uses for this technology, including underwater inspection, maintenance, and repairs in the oil and gas industry.”

US Navy to Test L3Harris UUV