Scanning Sonar for Search and Survey 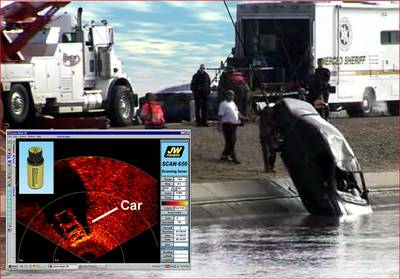 Main: Car being pulled from California drainage canal. Inset: Scanning sonar image of a car on the bottom.

When an SUV went off a Minnesota bridge and into a river in January the local sheriffs office was immediately notified and the Winona County Dive Team dispatched. Two bodies were quickly recovered from the vehicle, both wearing seatbelts, but two others were missing. The third victim was found the next day, but the fourth could not be located. Frigid water and limited visibility made a large scale search operation with divers nearly impossible. A decision was made to call in nearby Washington County Sheriff’s Department and their underwater robot. Two years earlier the department had acquired JW Fishers SeaOtter-2 ROV which has two cameras, four powerful thrusters and a SCAN-650 scanning sonar. The SCAN-650 allows the operator to “see” much further than the video camera because the sonar’s sound wave sweeps a 200 foot diameter circle around the ROV. The wave bounces off any object on the bottom and is sent topside where it produces an image of the object on a laptop computer. Using their ROV equipped with scanning sonar the Washington team was finally able to locate the fourth victim 125 feet from where the vehicle entered the water and on the opposite side of the bridge.

Another department successfully using scanning sonar is the Stanislaus County Sheriffs Department is California. Their dive team realized the value of the sonar when the car carrying a suspected kidnapper and his victim went into a drainage canal. The muddy water and swift moving current in the 50 foot deep, 75 foot wide canal would make searching with divers extremely difficult and very dangerous. Instead the team was able to deploy their SCAN-650 from a small boat and troll up and down the waterway. To their surprise, they not only located the suspect’s car, but also found 16 other vehicles. Team member Sgt. Mark Cardoza reported, “I love the sonar and believe it’s a very good tool that saves lots of bottom time. It is ideal for the work we do in the California Aqueduct and Delta Mendota canals which are treacherous for divers, but the perfect environment for sonar.”

Many teams, like the Search and Rescue Society of British Colombia (SARBC) in Canada, decide to add scanning sonar not only because it expands their capabilities, but because it is a fraction of the cost of side scan sonar, although not as effective in large scale search operations. SARBC, a nonprofit organization funded by corporations and individuals, was formed in 1983 to help save lives by promoting the exchange of information and developing new search techniques. They also lend assistance in land and inland water search operations when they receive a request from a search and rescue (SAR) group, law enforcement agency, or missing children’s organization. Their Special Services Unit provides specialized equipment and expertise, which may not be readily available within the province’s SAR community, to aid in a rescue or resolve a missing person incident. To assist in this mission the unit has acquired a SCAN-650NB narrow beam scanning sonar, as well as Fishers Pulse 12 boat-towed metal detector. The narrow beam sonar has higher resolution than the standard SCAN-650, providing more target detail which is critical when attempting to locate a drowning victim.

Marine survey companies have also found the scanning sonar to be a very useful tool in their operations. FEM Associates, a hydrographic survey company based in Port Harcourt Nigeria, provides services to the offshore oil and gas industry. Their primary use of scanning sonar is to locate and track pipelines running across the ocean floor, but they also realized how helpful it could be in a pipeline burial operation. Owner Festus Emanerame reports the sonar was attached to dredging equipment which allowed the operator to see the position of the dredge head in relation to the trench being excavated. Also visible on the screen were the depth of the trench and the position of the pipe within it.

Another Nigerian survey company employing the SCAN-650 is Geodetic Offshore Services. They use their scanning sonar as both an ROV mounted unit to give the operator greater vision of the surrounding underwater environment and as a standalone survey system. In a recent operation the sonar transducer was mounted on a weighed tripod and lowered to the seafloor about 25 meters from an exposed pipeline. Their objective was show the client the position of the pipe on the bottom and how much of it was uncovered.