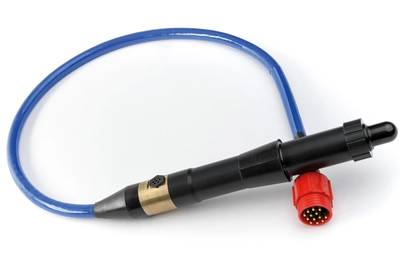 Due to be unveiled at Oi2020, Hydraq QQ1000, is a combination of acoustic and auxiliary sensors suitable for seabed, rising cable, or suspended cable deployment.

Providing enhanced metrology, the instrumented hydrophone has applications spanning underwater noise measurement and environmental use for Port and Harbor Authorities, including compliance with environmental legislation, through to recording of marine mammals, generic noise pollution, and identification of individual vessel sound signatures at sea, which are of value to the maritime and defense sectors.

The new Hydraq QQ1000 sensor meets the challenges of accurately measuring radiated noise and man-made noise pollution in the marine environment. The acoustic measurement bandwidth is compatible with current noise standards, including ISO, DNV and STANAG.

Uncertainty in sensor orientation has been addressed by incorporating a magnetic compass, which augments the three-axis accelerometer giving attitude and bearing. This overcomes issues experienced by traditional hydrophones, principally affecting high frequency measurements occurring in rising-cable deployments - such as measurement errors associated with a hydrophone’s variable polar response - that are influenced by tidal flow, or caused by hydrophone misalignment during seabed deployment.

Employing a sensitive three-axis accelerometer, Hydraq QQ1000 measures hydrophone vibration caused by proximity to propulsion systems or Scholte waves at the water/seabed interface.* These are low-frequency effects that contaminate acoustic measurement and need to be measured and accounted for.

Hydraq QQ1000 also acts as a sensor for hydrodynamic pressure variation. It incorporates an accurate high-resolution pressure sensor to provide hydrostatic and hydrodynamic pressure, giving direct measurement of water depth at the hydrophone. Capable of resolving pressure variations of 1mm equivalent water depth when fitted with the 3 bar FSD pressure sensor (30m max measurement depth), the sensor has sufficient resolution for hydrostatic pressure variation in proximity to underway ships. In many cases, a direct measurement of hydrophone depth enhances 3D position fixing, as acoustic determination of depth depends on reflections from a variable or ‘unreliable’ surface.

Mark Burnett, CEO at Seiche Water Technology Group, commented: “With ports such as the Vancouver Fraser Port Authority leading the way in underwater noise mitigation management plans, we see an increasing appetite for technology that can monitor multiple aspects of underwater noise enabling mitigation measures to be put in to place that reduce impact on marine mammals.  Added to applications that are of value to monitoring acoustic signatures of vessels, we believe that Hydraq QQ1000 will generate a lot of interest at Oi2020.”