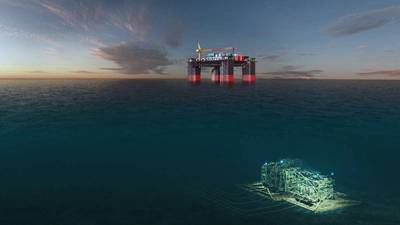 Under the contract, Aker Solutions will be responsible for the engineering, design, and manufacturing of a total of about 70 kilometers of dynamic subsea umbilicals. The scope of work includes three subsea compressor umbilicals, two subsea pump umbilicals, as well as ancillary equipment and spares. The umbilicals will provide power from the offshore platform to the subsea compressor and pump modules.

The Jansz–Io gas fields are located within production licenses WA‐36‐L, WA‐39‐L, and WA‐40‐L approximately 200 km off the north‐west coast of Western Australia in water depths of approximately 1,350 meters.

A modification of the existing Gorgon development, J-IC will involve the construction and installation of a 27,000-tonne normally unattended floating Field Control Station (FCS), approximately 6,500 tonnes of subsea compression infrastructure, and a 135km subsea power cable linked to Barrow Island.

The Jansz-Io gas field was first discovered in April 2000 and is located around 200 kilometers offshore the north-western coast of Western Australia, at water depths of approximately 1,400 meters. The Jansz-Io field is a part of the Chevron-operated Gorgon project, one of the world's largest natural gas developments.

This year, the National Oceanography Center (NOC) is celebrating the 25th anniversary of its first Autonomous Underwater Vehicle (AUV) mission.