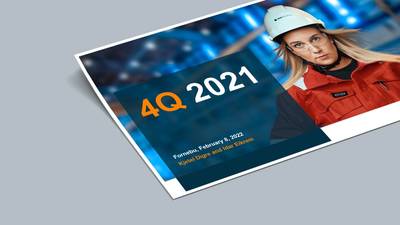 Norwegian oil services firm Aker Solutions raised its 2022 revenue outlook on Tuesday and said its earnings margin is likely to increase this year while order intake is headed for a record high, sending its shares sharply higher.

The company now expects revenue to rise by more than 20% to at least 35 billion Norwegian crowns ($3.97 billion), up from earlier guidance of a 15% increase, as the oil industry is expected to step up spending amid supply tightness.

Its Oslo-traded shares had risen 7.5% by 0856 GMT to a three-year high, outperforming the wider European oil and gas index which was up 0.75%.

"A tight supply-and-demand balance in the oil and gas market is expected to result in an attractive investment environment for the company's customers, supported by greater confidence in the oil-price environment," Aker Solutions said.

"This is projected to lead to a substantial step-up in capital spending, and Aker Solutions is well positioned to capitalize on such a cyclical recovery," it added.

The company projected revenue would grow to around 45 billion Norwegian crowns in 2025, with a third of that coming from the renewables sector such as the construction and installation of offshore wind turbines.

At the end of the fourth quarter, renewables and energy transition solutions, such as carbon capture and storage, represented 32% of the company's total order backlog of 49.2 billion crowns, it added.

Earnings before interest, taxes, depreciation and amortization (EBITDA) excluding special items stood at 593 million crowns for the October-December quarter, up from 121 million in the same period of 2020.