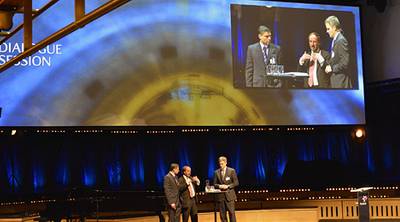 Here Statoil CEO Helge Lund concludes a dialogue session with GE Oil and Gas head Lorenzo Simonelli regarding some of the challenges and opportunities that operators and suppliers share. (Photo: Harald Pettersen - Statoil)

Statoil invited politicians, suppliers and other important stakeholders to Stavanger Concert Hall  to share challenges and increase understanding for the changes that are the inevitable outcome of tighter margins in the oil and gas industry.


Stavanger Day, being arranged this year for the first time, is set to become Statoil’s most important arena for meeting politicians and industrialists in the Stavanger region. Some 630 participants were in attendance at the Concert Hall.


NCS is Statoil’s centre of gravity

President and CEO Helge Lund emphasised the important role played by the Stavanger region and the west coast of Norway.

“In addition to being at the centre of the country’s oil and gas industry, Stavanger is also a global energy capital. It has achieved this position by virtue of an industry that has managed to grasp opportunities,” he said.

In response to the speculation surrounding the future role of the NCS in the company, he said the following: “Statoil’s NCS investments have increased by 75% since 2010. That means we’re now investing around NOK 54 billion annually and we’re seeing greater activity than ever, with more megaprojects like Johan Sverdrup.

“Some claim that Statoil would be better advised to stick to the NCS alone. But in our industry geology takes precedence over geography.  Competition and innovation take place all over the world. There’s no way in which we can be more competitive by competing less.”

Oil and gas industry under pressure

Lund was also clearly determined to convey how tough the competitive pressures in the oil and gas industry have become.

“Over the past decade the price of oil has trebled, while the return on capital invested has fallen by a third. Investments have quadrupled as production has declined. Our industry is under pressure and we must respond by making changes.

“Sustainability is more and more the theme for discussion when our industry is debated. Climate change is a reality and we must show that the industry can meet this challenge. We can do so by reducing emissions, by delivering natural gas, and by continuing to work on energy efficiency measures and technology developments within carbon capture.

He underlined the fact that Statoil’s growth ambitions remain firm, though important changes will be made to boost the company’s competitiveness.

“Our exploration success has given us opportunities and we can now choose between 100 projects. But we will be selective and ensure we choose those that meet expectations of competitive returns on capital.

“We will increase efficiency in all parts of the organisation. We will reduce costs by some USD 1.3 billion by 2016. Our measures include implementing the biggest technical efficiency improvement programme ever conducted in the company.

“Moreover we will increase yields to our shareholders and this year introduce quarterly dividend payments.”

Invitation to cooperation
“Behind every Statoil success there are many suppliers,” said Lund, referring to improved oil recovery and HSE as examples of areas where close cooperation has borne fruit.

“These are examples of where bold ambitions, a similar mind-set, and working side by side have produced results. We should also adopt this approach in tackling the competitive challenges we are now facing.”

Lund was clearly determined to convey how the tougher situation in the oil and gas industry makes it necessary to adopt new measures.

“We want to improve together with our suppliers”

“If we are to continue succeeding as a company, we need to succeed together with our suppliers,” said head of procurement Anders Opedal. He added weight to the important role played by Statoil’s suppliers, in that they contribute from 40% to 95% of the company’s expertise and resources.

Opedal presented specific areas in which he would like to see closer cooperation with suppliers in future.

“In Statoil we are intensifying our efforts to standardise, simplify and industrialise. To a much greater degree we want to do this together with our suppliers in future, so that that the simplifications and changes we perform will also be seen in their value chains and processes. We have to act as the one company throughout; coordinated and with clear expectations and standards that the suppliers can relate to."

Suppliers with specific challenges for Statoil

“We’ll work more smartly,” said senior vice president for maintenance and modifications Tore Sjursen of Aker Solutions when asked by Statoil about how an international supplier based in Stavanger would respond to the new industrial challenges.

For Statoil he set the following challenges: