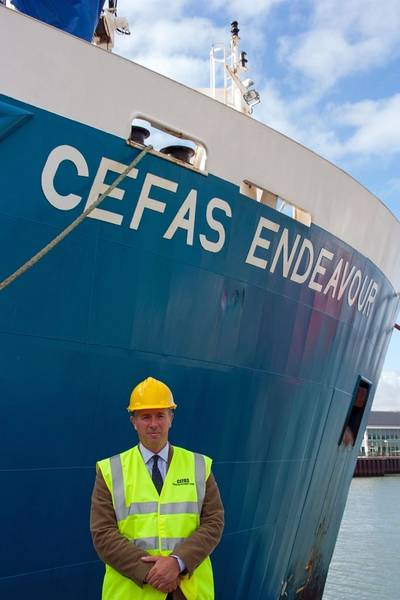 New CEO Rear Admiral Tom Karsten takes up the helm of U.K. marine science agency Cefas
New CEO Tom Karsten who joined Cefas last month, has today opened the doors of the 74-meter-long research vessel the Cefas Endeavour, with a two-day showcase event for industry taking place at Portland Bill.
Representatives from public and private sector organizations including the U.K. Ministry of Defense, Royal Navy and the Met Office were given a tour of the oceangoing research vessel, a first-hand demonstration of the ship’s marine science capability and an opportunity to meet some of Cefas’ marine scientists, who each spend up to six weeks a year undertaking scientific research and surveys for U.K. customers, including renewable energy, oil and gas and telecommunications sectors.
“Just four weeks into my new post, I am delighted to be able to welcome U.K. business on board the Endeavour,” Karsten said. “This is a rare opportunity to get a close-up view of Cefas’ purpose built research vessel, which spends up to 290 days a year at sea, specializing in survey operations for U.K. and international governments and private sector customers.”
Cefas has been working with a number of these organizations to deliver specialized survey projects spanning the globe, including a sea bed mapping exercise in the British Virgin Islands and shipwreck analysis in St Helena.
Closer to home, Cefas have been coordinating the collection and delivery of new data and evidence in support of the U.K. Government’s commitment to implement a network of Marine Protected Areas. The Cefas Endeavour has been instrumental in this huge survey exercise and has undertaken acoustic and sampling surveys at many of the 127 sites originally selected as candidate Marine Conservation Zones.
Defra appointed Rear Admiral Tom Karsten as the Chief Executive of Cefas in May this year. Taking up his new role September 7, Karsten brings a broad maritime background with command roles in the South Atlantic, Far East, Gulf and Mediterranean.  In 2007 he was promoted to Commodore serving as Navy Command’s Deputy Commander Operations, followed by a year at Oxford University as the Royal Navy’s Senior Hudson Fellow researching Arctic geopolitics. In 2010 he was appointed as Commander British Forces Gibraltar, serving on the Rock for two years. Karsten was promoted to Rear Admiral in 2012. Before joining Cefas, he was U.K. National Hydrographer and Deputy CEO at the U.K. Hydrographic Office where he led its international engagement and capacity building program alongside commercial negotiations for the supply of global hydrographic data.
On the subject of his new post Karsten said, “Cefas is entering an exciting period of development and growth, and I am immensely privileged to be joining the U.K.’s leading marine science agency at this time. I look forward to opening our doors to a range of new sectors, both at home and internationally.”
He continued, “Through our leading edge science and technology, we play a major role in growing the marine and freshwater economy, creating jobs and safeguarding food security, public health and the health of our seas. It’s a critically important role, and I want more people to know about it.”
Cefas Divisional Director Sian Limpenny, who has responsibility for the R/V Endeavour said, “At Cefas we make it a priority to ensure that our facilities remain up-to-date, offering the very latest scientific and technological capability. R/V Cefas Endeavour is an excellent example of this approach.”
“To ensure that the vessel and its broad array of scientific equipment continues to be at the forefront of technological advances, we ensure they are regularly assessed, maintained and upgraded. This means that the vessel maintains its position as a leading survey platform in the U.K.’s research fleet,” Limpenny added.
“The vessel is a truly multidisciplinary platform and can conduct many differing and complementary survey activities at the same time. This includes fisheries surveys, seabed mapping and sampling and metocean investigations, as well as many other bespoke investigations, making her a highly cost-effective and scientifically robust method of marine data gathering.”
The R/V Cefas Endeavour is managed and operated by Cefas in partnership with P&O Maritime Services U.K. The vessel, which entered service in 2003, is fitted with the latest specialist survey equipment, and is equipped to support a broad range of activities including hydrographic surveys, environmental sampling, fish stock assessment, and the servicing of autonomous monitoring equipment. To facilitate certain capabilities, its underwater radiated noise profile is compliant with standards established by the International Council for the Exploration of the Sea (ICES). Since its introduction, Cefas’ customers in both the public and private sectors have utilized the vessel to perform a range of survey operations, and is available for international third party charter.
• British Virgin Islands • Far East • food security
Email