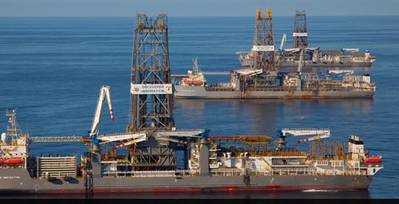 Transocean Ltd. inform that a subsidiary company has awarded contracts to Sembcorp Marine's subsidiary, Jurong Shipyard, in Singapore for construction of two newbuild dynamically positioned ultra-deepwater drillships with contract options for up to three more.

The two drillships are expected to be delivered from the shipyard in the second quarter of 2017 and the first quarter of 2018, respectively. The combined capital cost is estimated at approximately US$1.24 billion including the shipyard contracts; project management; owner-furnished equipment; inventory and capital spares; but excluding capitalized interest. Transocean consider that the payment terms for both rigs are very favorable.

The dual-activity rigs are equipped with Dynamic Positioning Class 3 (DP-3) capabilities, and the drillships' 1,250-ton load path will enable operations in up to 12,000-foot water depths and drilling depths of up to 40,000 feet.  The drillships will have accommodations for a crew of 220 personnel and will be initially outfitted with one 15,000 psi blowout preventer (BOP) with the ability to add a second BOP.

TechnipFMC Wins Contract for Gas to Energy Project in Guyana