Treasure Hunters to Get Custom ROV 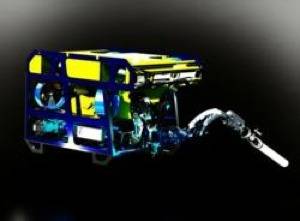 Last year, Sub Sea Research made international news with the announcement of their discovery of the $4 billion gold and platinum cargo aboard the SS Port Nicholson, a freighter that was sunk by a German U-Boat off the coast of Massachusetts in 1942.

A year on, Sub Sea Research has teamed up with Maine-based, award winning technology company Howe and Howe, which designs and builds custom vehicles, robotic platforms and fabricated goods. The resulting effort is the 'Lamprey Rover', a robotic tracked vehicle that is specifically tailored to this wreck’s needs, and is the suitable tool to bring up the cargo this salvage season.

Howe and Howe Technologies believes their prototype for the Lamprey Rover is exactly what is needed to overcome the difficulties this wreck has presented. Unlike other work-class ROVs, the Lamprey boasts a set of eight sixteen-inch diameter thrusts, extremely powerful electromagnets for use in adhering the vehicle to the ship’s hull, and includes multiple methods for actually getting inside the cargo hold.

“Rather than buying an existing ROV and then going through the process of retrofitting it with the correct tools, we have the freedom to place components where we need. We can spec the correct components to meet our system requirements and we avoid the aggravation of trying to integrate with a system that wasn't meant to perform the required tasks,” says Josh Spaulding, an engineer at Howe and Howe Technologies.

The Port Nicholson, is resting on the ocean floor in what is considered the Mesopelagic zone, over 600 feet below sea level. The Lamprey’s unique design will allow it to safely align itself with the ship’s cargo hold, and its diamond-blade saws will allow it immediate entry. The vehicle is equipped with a pair of Conan manipulators, which can pick up to 500 lbs. of weight. It also features a removable track system. Other work-class ROVs on the market typically have one manipulator and are limited in wreck penetration.

“Funding options are being discussed for the Lamprey. Once completed, the contents of the wreck will take a very short time to recover, and it’s off to the next billion wreck,” says Greg Brooks, founder of Sub Sea Research.