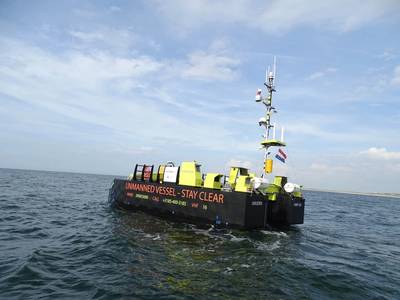 It’s a 12m-long, “DP equivalent” catamaran design, developed to offer a stable platform for survey and inspection operations, using vessel-based sensors and an up to 3-tonne remotely operated vehicle (ROV) capacity including the LARS (launch and recovery system), he says.

The first one was launched in August, with sea trials completed in October. It has two moon pools, with retractable poles for sensor deployment, can travel up to 2,600nm with up to 27-day endurance, 10kts transit speed and up to 7kts survey speed.

“It’s one of the largest and most stable USVs in the commercial market,” he says. “The catamaran design gives it additional stability. Because it has an ROV, it can combine geophysical survey and ROV inspection.” That makes it ideally suited to offshore wind farms for where you want to do cable inspection surveys and monopile visual surveys, he says. 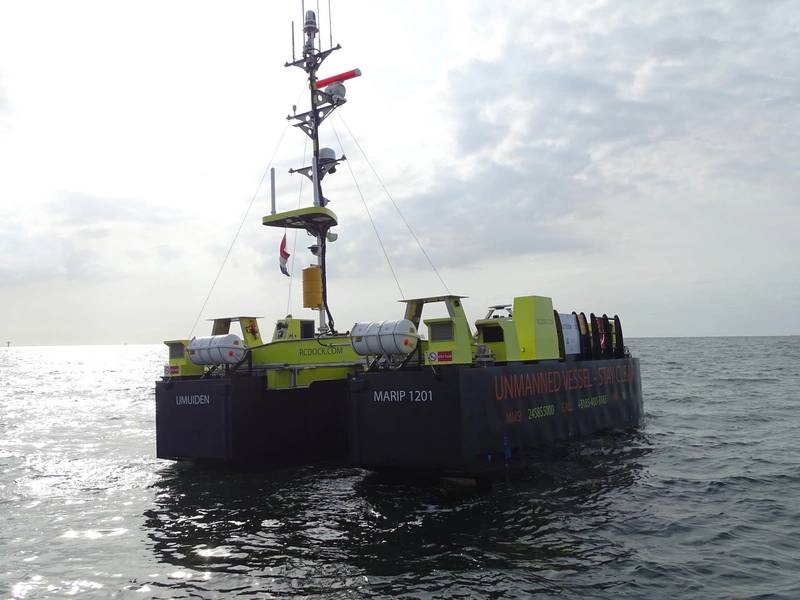 An initial build of the vessel currently hosts a Valor ROV (from another Acteon company, Seatronics), with a SPRINT-Nav Mini from Sonardyne for navigation, and payload options including multibeam, HD video, Valeport MiniPS and CTD/SVS, CP Stab (from the ROV’s robotic arm) and Vaarst SubSLAM.  Marten says the vessel pontoons can be unbolted and containerised for easy shipping. He says it also has an ultra-low carbon footprint, with 100% recyclable hull material (HDPE that’s low maintenance and recyclable), and waterjet main propulsion (to avoid ROV tether entanglement) able to run on 100% biofuel. This means it has 70-80% less emissions than a standard vessel, he says.

During 75 hours of sea trials out of Ijmuiden in the Netherlands, the vessel used 2,427 litres (l) of diesel, covering 110 nm, generating 6,359 kg of CO2 emissions while gathering 1,787 gigabytes of data. That’s 32 l/hour, he says, compared with around 292 for a typical manned vessel doing same work scope (ROV and survey).

“And I think that is a very conservative estimate when you think ships like conventional manned vessels measure their fuel in metric tonnes, instead of litres,” says Marten.

“We want manned (certification) because of regulations and the fact they change from country to country,” says Marten. “We think manned certification will give us an advantage. If we come across a stumbling block, where a certain authority will not give us certification for unmanned, the USV has a conning station so we can put a man on.”

An area that UTEC has paid close attention to is communications technology, especially for remote operations.

“Before we started developing a USV we started developing remote services in general and developed a standard piece of hardware and software to enable us to deliver reliably remote services,” says Marten. “Behind that is having secure communications. Satellite technology suffers from packet loss and delays over wide areas networks. The effect of that is, if you have a 5MB connection upload speed you might only be able to use 2MB of the bandwidth you paid for and bandwidth at sea is very expensive. We wanted to be able to use 100% of the network.”

UTEC has developed a Comms Hub with a SD-WAN tunnel, says Marten. This uses a Smart Networking Protocol to provide security and network resilience. It can be used with VSAT, low earth orbit satellites such as Starlink, 4G, etc.

UTEC has recently been using this on a vessel in the US Gulf of Mexico where the hub could use Starlink, as well as VSAT and 4G. “The network bonding allows us to use all of those, although having the Starlink plugged in we don’t need the bandwidth from the others,” says Marten. 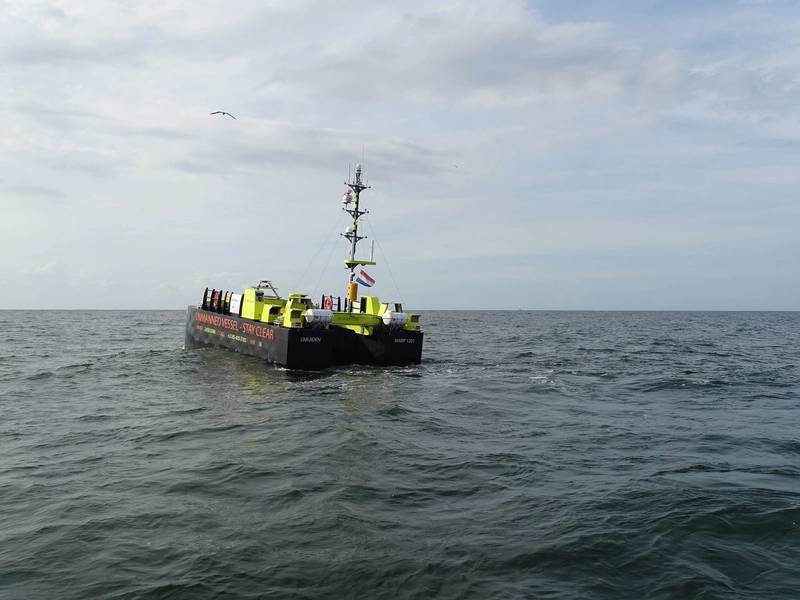