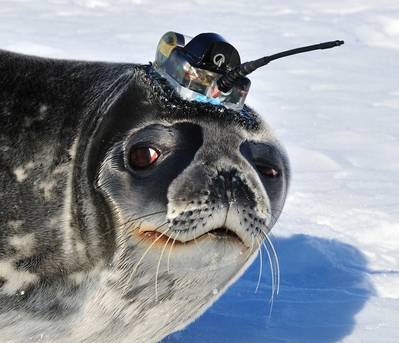 Bringing home the prize for Valeport’s first product in action competition were an image of a Weddell Seal in the Antarctica carrying a Valeport CTD sensor and a hands-on video showing the pilot deployment of a Valeport Midas directional wave recorder at the mouth of the U.K.’s Humber Estuary.
U.K.-based Valeport, a designer and manufacturer instrumentation for the oceanographic, hydrographic and hydrometric communities, asked its customers to submit videos and photos of Valeport products in action for a chance to win an iPad Air 2 (video category) and iPad Mini 3 (picture category).
Daniel Costa of the University of California’s photo of a Weddell Seal in the Ross Sea, Antarctica carrying a Valeport CTD sensor integrated into a tag built by the Sea Mammal Research Unit, St Andrews won the picture category.
The video category went to Ross Jennings of the University of Hull with his footage of a Valeport Midas DWR being deployed at Spurn Point at the mouth of the Humber Estuary as part of a pilot deployment project which aimed to test the device and deployment methodology for later fieldwork in more energetic sites upstream.
Valeport’s sales and marketing manager Kevin Edwards said, “We were really delighted by both the quality and quantity of entries we received, the great images and content made it pretty tough for the panel to judge the competition.  The location information, work being conducted and stories behind the images and video were all very interesting.  It was great to see such variety and unusual applications in some cases.”
• Antarctica • California • Kevin Edwards