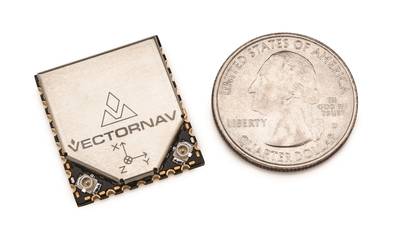 VectorNav Technologies introduced a surface mount version of its VN-300 Dual Antenna GPS-aided Inertial Navigation System (GPS/INS). The VN-300 surface mount device (SMD) is a miniature MEMS-based inertial navigation module that includes both inertial navigation and GPS-compassing capabilities, which together provide for highly accurate position, velocity, and attitude data in both stationary and moving conditions. With the release of the surface mount version, VectorNav is also announcing the addition of GNSS capability to the full VN-300 product line. The VN-300 SMD completes VectorNav’s line of industrial grade inertial sensors, joining the VN-100 IMU/AHRS and VN-200 GPS/INS surface mount and Rugged modules.
Incorporating the latest MEMS sensor technology, the VN-300 combines three-axis accelerometers, three-axis gyros, three-axis magnetometers, a barometric pressure sensor, two GNSS receivers and a low-power micro-processor into a single, surface mount package. When in motion, the VN-300 couples the position and velocity measurements from the onboard GNSS receivers with measurements from the onboard inertial sensors to provide position, velocity and attitude estimates of higher accuracies and with better dynamic performance than a standalone GPS or GNSS receiver or Attitude Heading Reference System (AHRS). The dual GNSS receivers provide the added benefit of accurate True North heading measurements when the sensor is stationary through the use of GPS interferometry techniques.
With the release of the surface mount version of the VN-300, VectorNav’s own VN-300 Rugged is surpassed as the smallest and lightest Dual Antenna GPS/INS on the market. The surface mount VN-300 shares the same footprint and form factor with VectorNav’s surface mount VN-100 IMU/AHRS and VN-200 GPS/INS.
“The VN-300 surface mount chip is an achievement that combines the best of our expertise in inertial navigation algorithms and our innovative approach to miniaturizing embedded navigation sensors. There simply is no other product like it on the market,” stated VectorNav President, John Brashear. “The VN-300 SMD completes our Industrial Series of inertial navigation sensors and paves the way for the expansion of our product lines into new markets and applications.”
The VN-300 is suited for industrial and military applications that are size, weight, power and cost (SWAP-C) constrained, or that require an inertial navigation solution under both static and dynamic operating conditions, especially in environments with unreliable magnetic heading such as fixed-wing and multirotor UAVs, aerostats and other tethered UAVs, gimbaled camera systems onboard helicopters and multirotors, antenna systems onboard ground vehicles and marine vessels, weapons training and warfare simulation and direct surveying, among others.
The addition of GNSS capability now enables the VN-300 product line to include measurements from satellites in the GLONASS constellation in addition to GPS. These additional measurements provide greater tracking reliability and improved VN-300 performance in urban canyons and reduced visibility conditions.
VectorNav also announced the release of a new firmware update for the VN-300 that improves the overall accuracy and time to acquisition of the GPS-compass feature. The new firmware also includes logic that enables the VN-300 to intelligently and seamlessly transition between magnetic heading (AHRS) mode (used on start-up and in GPS-denied environments), to INS operation in dynamic conditions and GPS-compass in static conditions, without requiring input from the user.
The VN-300 SMD, as well as the VN-300 GNSS capability, will be available in the fourth quarter of 2015.
• sensor technology • Simulation • antenna systems
Email

Sonardyne International Ltd. has increased the capabilities of its Fusion 2 software package to enable surveyors and construction…