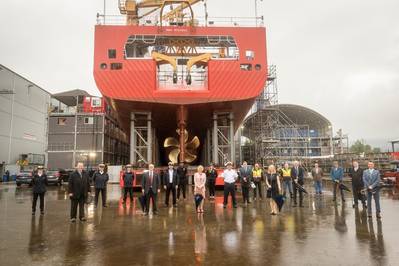 The 63.4-meter CCGS John Cabot will next undergo sea trials before its delivery to the Coast Guard later this summer. The vessel will be based in St. John’s, Newfoundland and Labrador.

CCGS John Cabot and previously delivered sister ships, CCGS Sir John Franklin, now stationed in Victoria, British Columbia, and CCGS Capt Jacques Cartier, stationed in Dartmouth, Nova Scotia, are the first class of ships built under the National Shipbuilding Strategy (NSS), the Government of Canada’s strategy to renew the fleets of the Canadian Coast Guard and Royal Canadian Navy. Two ships have been delivered and the third launched from Seaspan’s Vancouver shipyard over the course of 13 months.

The OFSV is fully equipped to support Fisheries and Oceans scientists in the collection and analysis of data on Canada’s marine ecosystems and the impacts of climate change. The floating laboratories features a full suite of state-of-the-art systems, including a deployable sensor-laden drop keel, high-tech fishing trawls and four science labs — a wet lab, a dry lab, an ocean lab and a control lab.

“The three Offshore Fisheries Science Vessels, which were specifically designed and built in British Columbia, will enable Fisheries and Oceans and the Coast Guard to continue conducting and supporting critically important scientific and research work, including gaining more data on the impacts of climate change on our waters and marine environments,” said Anita Anand, Minister of Public Services and Procurement.

The vessels support scientific research through work such as performing fishing and acoustic surveys of fish and invertebrates, collecting information on the abundance and distribution of marine species and collecting data on marine ecosystems and the impacts of human activity on fisheries resources and ecosystem health.

The OFSVs, although primarily focused on science and research, also have the capability to support search and rescue, and environmental response and operations as required.