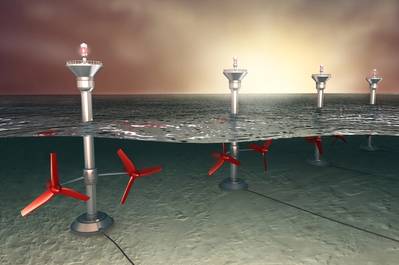 The UK Government on Wednesday announced its "biggest investment in a generation" into Britain’s tidal power. The UK government will invest £20 million per year in Tidal Stream electricity as part of its renewable energy auction scheme.

"UK government announces biggest investment in a generation into tidal power, kickstarting a new chapter for the UK’s tidal energy industry this will strengthen energy security by adding to our diverse, renewable electricity supply and create jobs across the UK today’s investment in tidal energy further demonstrates the UK’s commitment to build a strong, home-grown renewable energy sector to reduce our reliance on volatile fossil fuels," the Government said.

Today’s announcement will unlock the potential for a thriving UK tidal power sector, with the cash boost supporting marine technologies which could benefit the whole of the UK, the government said.

"As part of the fourth allocation round of the Contracts for Difference Scheme due to open next month, the UK government will ensure that £20 million per year will be ringfenced for Tidal Stream projects, giving the marine energy sector a chance to develop their technology and lower their costs in a similar way to the UK’s world-leading offshore wind industry. This will bring the total funding for this allocation round to £285 million per year," the UK Government said.

It added that the £20 million additional ringfenced budget is for Tidal Stream projects, not Tidal Range, which is a different technology. Tidal Range projects are not eligible to enter into the CfD scheme.

"History has illustrated the effectiveness of the scheme’s design in keeping costs down - between the first allocation round in 2015 and the most recent round in 2019, the price per unit (MWh) of offshore wind fell by around 65%," the Government said.

Over time, the Government said Wednesday, marine technologies have the potential to significantly contribute to our decarbonization commitments and will support hundreds of green jobs across the country, with projects currently in development in North-West Scotland, North Wales, and the Southern coast of England. Business and Energy Secretary Kwasi Kwarteng said: "As an island nation we are perfectly placed to capitalize on clean marine energy, building on our booming offshore wind sector which is now a British industrial success story.

"We hope to see marine energy follow in the successful footprints of other renewable technologies, where we’ve seen costs fall dramatically in recent years thanks to UK government support.

"The investment today provides a major push for tidal power to become a key part of the next generation of renewable electricity projects needed to strengthen energy security as we work to reduce our dependency on volatile fossil fuels."