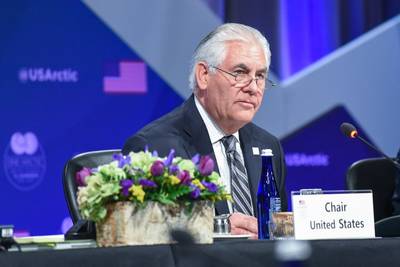 As foreign ministers from countries with territory in the far North celebrated an agreement on fighting climate change this week, one topic seethed below the surface: growing competition for Arctic resources and sea lanes as the ice melts.

Russia, one of eight members of the Arctic Council which includes the United States, Canada and the Nordic countries, has been pouring money and missiles into the Arctic as well as reopening and building bases there. This is bringing its Arctic military presence to the highest level since the 1991 fall of the Soviet Union.
Although the Arctic Council does not officially consider security issues, the topic was on the minds of policy makers.
Senator Dan Sullivan, a Republican from Alaska, told Reuters he briefed Secretary of State Rex Tillerson - who hosted Thursday's Arctic Council meeting - on a Pentagon report on Arctic strategy, portions of which were made public in February, as they flew from Washington to Fairbanks for the summit.
"The Russians are certainly making a play in the Arctic that is doing anything but lowering tensions," said Sullivan, who had pushed the Pentagon to issue the report.
Recommendations in the report included bolstering the ability of U.S. forces in the Arctic to defend the homeland and exercise sovereignty and strengthening alliances and partnerships in a region awash with natural resources.
U.S. scientists estimate the Arctic contains about one third of the world's undiscovered but technically recoverable natural gas and 13 percent of its oil of the same category. Oil prices are not high enough now to justify drilling in harsh Arctic waters, only a fraction of which are charted to modern standards. But oil prices change, and last month President Donald Trump issued an executive order to open up Arctic drilling.
Other Arctic resources include rare earth metals, coveted by electric car makers who use them in motor components. The metals are now mostly mined in China.
As sea temperatures rise, fish stocks are moving north, as are fishing boats, because billions of people rely on the food for protein.
In addition to building up its military presence in the Arctic, Russia is also building three icebreakers to add to its fleet of 40 which includes six nuclear-powered ones.
The United States has only one major icebreaker, which is 40 years old, and hopes to complete the first of six new ones by 2023. As sea ice melts due to global warming, sea lanes open, but ice can rapidly freeze over. This makes passage perilous for ships, so icebreakers are important assets.
An annual assessment of worldwide threats released on Thursday by Director of National Intelligence Dan Coats said competition over Arctic sea routes and resources will include countries already active in the region - but also some others that are not.
The report did not mention China's interest in the Arctic, but the country is making moves. It became an observer member of the Arctic Council in 2013. And in April, news broke that Denmark spurned a offer from a Chinese mining company last year to buy an abandoned naval base in Greenland.
Russian Moves Being Closely Watched
The Arctic is calm compared to many other regions of the world, and Russia's Foreign Minister Sergey Lavrov stressed a lack of tension in the region in addressing the Arctic Council.
"Russia has been doing a lot to ensure that the Arctic develops as a territory of peace, stability and cooperation," Lavrov said on Thursday. "We are confident that there is no conflict potential in the region."
Still, Russia's Arctic fortification is being watched closely by the United States and its allies.
NATO has said in a Strategic Foresight Analysis report that competition for resources could lead to instabilities in the Arctic in coming decades.
U.S. Coast Guard Commandant Paul Zukunft said last week at a Washington think-tank that Russia has all of its chess pieces on the board in the Arctic, while the United States only has a few. "We can write great policy, but if you do not have presence to exert sovereignty you are really nothing more than a paper lion," Zukunft said.