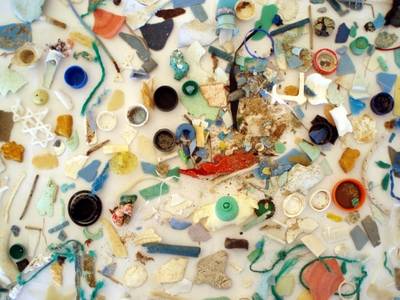 The Arctic is a dead end for floating plastic waste dumped in the Atlantic Ocean off Europe and the United States and swept north by ocean currents to a polar graveyard, scientists said on Wednesday.
Levels of plastic found east of Greenland and in the Barents Sea off Norway and Russia were far higher than expected for the sparsely populated regions, according to the report showing how man-made pollution extends even to remote parts of the globe.
"The northeastern Atlantic sector of the Arctic Ocean appeared as a dead end for the surface transport of plastic pollution," the authors wrote in the open access journal Science Advances.
The survey, by the Tara Oceans circumpolar expedition that sampled 42 Arctic sites in 2013 with nets, found hundreds of thousands of mostly tiny bits of plastic per square kilometre (square mile) in the northeastern Atlantic region.
Much of the plastic was apparently old and had floated north from Europe and North America. Levels were comparable to those in ocean gyres, vast swirling currents nearer the equator, where plastic debris is known to accumulate, they wrote.
"Ninety-nine percent of the floating plastic in the Arctic was confined in the Greenland and Barents Seas," lead author Andres Cozar of the University of Cadiz in Spain told Reuters.
"The plastic pollution in the rest of the Arctic Polar Circle was low or absent," he said.
Global warming could open the Arctic to more pollution, partly as the extent of sea ice shrinks. "High loads of marine plastic pollution may become prevalent in the Arctic in the future," the study said.
The study said there was "special concern" about the impact of plastic on fragile Arctic wildlife, including on the seabed where bits may eventually sink.
Northern fulmar birds on the Arctic Svalbard islands north of Norway, for instance, have been found with high levels of plastic in their stomachs from discarded plastic bags, fishing nets and other trash.
Separately, the Arctic Monitoring and Assessment Program (AMAP), which was not involved in the report, is examining wider pollution risks from plastics.
"We're looking to see how big the problem is for the Arctic - both the physical plastic and the chemicals attached to the surface," Lars-Otto Reiersen, executive secretary of AMAP, told Reuters.
(Reporting by Alister Doyle; Editing by Tom Heneghan)
• Arctic Ocean • Arctic seas • Atlantic Ocean