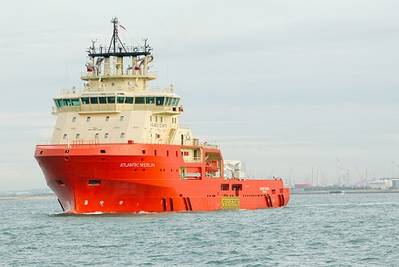 The Jaya Sovereign is a sister ship of the Jaya Supreme which was delivered to Atlantic Towing in November of last year. Both vessels are among the most sophisticated anchor handlers ever built at a Singapore shipyard.

In announcing the sale, Jaya said Atlantic Towing’s decision to acquire the sister ship was due to the high quality performance of the Jaya Supreme (renamed the Atlantic Kestrel) since the company took delivery of the vessel as well as the on-going demand for higher Ice Class vessels for work in Arctic waters.

Jaya Sovereign’s main engines deliver more than 16,000 bhp power output with a continuous bollard pull of over 200 metric tons. The vessel is being built to Wärtsilä’s exacting VS4622 design, with Clean Design notation from DNV that limits air emissions and sea pollution and a green passport to enhance future recyclability. For emergency oil spill response purposes, the vessel features oil recovery tanks.

Jaya Sovereign is maneuverable, its 22-metre beam giving excellent stability even in the rough seas of the North Atlantic winter. Built with Dynpos-AUTR Dynamic Positioning (Class 2), the ship is fitted with two bow thrusters and two in the stern, 19-ton and 13-ton thrust apiece respectively.

The vessel bridge is designed for Naut-OSV (A) notation, significantly enhancing navigation and communication capabilities.

For work in areas close to the Arctic Circle, the vessel has DNV’s Ice-1A class notation, applicable for ships operating in broken channels made by breakers in first-year ice or in open waters with small floes.

She is built to Comf-V(3) class, which keeps noise and vibration levels within strict parameters. Comfort Class is typically found on passenger ships rather than OSVs, demonstrating strong commitment to the welfare of its crew complement, up to 45, it said.