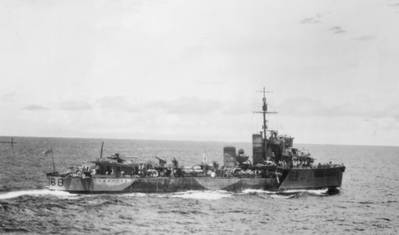 A joint effort between the Royal Australian Navy and the Sri Lankan Navy will set out to solve one of the remaining maritime mysteries of World War II, after new information has come to light regarding the whereabouts of a sunken warship.

Australian destroyer HMAS Vampire sank on April 9, 1942 as the result of an intensive Japanese air attack off the Sri Lankan coast. The destroyer was broken in half by several bombs and went down in less than 10 minutes, killing nine sailors while hundreds more were rescued by the hospital ship Vita and local fishing vessels. A few men were even able to swim ashore.

“We have always known roughly where the Vampire went down but its exact location has proved elusive,” Rear Admiral Mead said.

The Royal Australian Navy believes there is strong chance HMAS Vampire’s final resting place has been identified as the result of research by Australian and Sri Lankan hydrographers in recent months.

The Australian hydrographic ship HMAS Leeuwin and mine hunter HMAS Diamantina are in the region to assist with a more thorough search.

“There are no guarantees of success but we owe it to the families of those on board to follow up this new lead,” Rear Admiral Mead said.

He continued, “Whatever the outcome, we are most grateful to Sri Lanka for their cooperation and understanding.

“The Vampire story illustrates the enduring ties we have with Sri Lanka and the Indian Ocean region.”