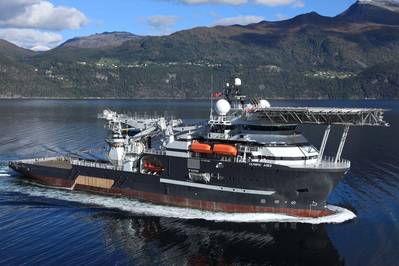 The two ROVs will be installed in the purpose built ROV hangers onboard the vessel by BRIL for ROV and survey services.

Established at the end of 2011, BRIL has grown significantly with staff numbers increasing significantly, with the addition of 20 onshore personnel and the offshore workforce trebling to more than 100.

Increased market demand for ROV services, along with major contract wins in the renewable and oil and gas sector has driven BRIL’s rapid development and has firmly established the business as a leading remote intervention contractor with numerous third party clients.

Mike Arnold, chief operating officer of BRIL said, “We are delighted to secure this contract to install these world-class Quasar ROVs on the Olympic Ares and look forward to a long term relationship with Olympic Shipping. To deliver high quality products and services to our clients, we have invested significantly in our ROV fleet, including the addition of the 150hp Quasars to our13 systems.”

Bibby Offshore with new sister company Bibby Remote Intervention Limited (BRIL), has grown from 10 employees in 2003 to now employing more than 1,300 people onshore and offshore worldwide, with offices in Aberdeen, Liverpool, Singapore, Trinidad and Houston. The company has an international fleet of six subsea support vessels and 13 Remote Operating Vehicles (ROV) and will continue to add to their fleet to meet demand.

2020 presented a monumental challenge for many industries and workers, particularly seafarers, as COVID-19 effectively left…