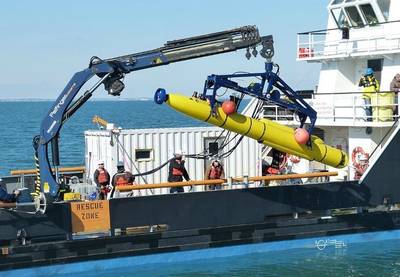 In February, Bluefin mobilized a Boston Harbor Cruises' vessel, the Scarlett Isabella, at their dock in Quincy, Massachusetts and transited for over 48 hours towards the testing site. While severe weather brought on by Storm Q forced the team to adjust logistics plans, they were able to successfully conduct six days of operational testing including two 4,450-meter dives totaling 11 hours.

"I am proud to have a team, partners, and vendors that step up to solve subsea challenges," said David P. Kelly, President and CEO of Bluefin Robotics. "We are looking forward to tackling the next set of challenges posed by the DARPA Program and applying our hard-won experiences to others."

Phase III of the contract was awarded in early March and will fund the full integration of the deep-sea sonar into the vehicle, as well as fund the production of a second system with sonar to support networked operations.