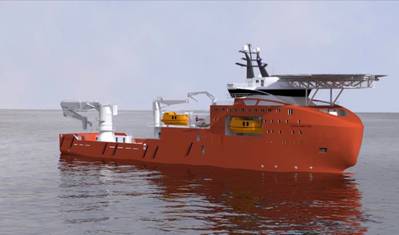 Vard Holdings says it has secured a contract with a new customer, Harkand Group (Harkand), for the design and construction of a Diving Support and Construction (DSC) Vessel. The value of the contract exceeds NOK 1 billion.

The vessel is scheduled for delivery from Vard Søviknes in Norway in 2Q 2016. and the hull is to be delivered from Vard Tulcea in Romania. The contract includes an option for a second similar DSC vessel.

The new order will be of VARD 3 03 design, specially designed and equipped for diving and subsea operation duties with a high focus on good sea-keeping abilities, excellent station keeping performances and low fuel consumption.

The DSC vessel will be fitted with a 250 ton offshore crane, a ROV hangar, and a Twin Bell 18 Man Saturation Diving System, supporting split level diving operations to a maximum diving depth of 300 meters.

Vard informs that Harkand, headquartered in London,  is a growing global subsea Inspection, Repair and Maintenance (IRM) group with operations in four regions across the globe; Africa/Middle East, Asia Pacific, Europe, and North America. Harkand’s expertise is in subsea inspection, repair and maintenance as well as light construction, construction support and survey services.

About Vard
Vard Holdings Limited (VARD), together with its subsidiaries is one of the major global designers and shipbuilders of offshore and specialized vessels used in the offshore oil and gas exploration and production and oil services industries. Headquartered in Norway and with 10,000 employees, VARD operates ten strategically located shipbuilding facilities, including five in Norway, two in Romania, two in Brazil and one in Vietnam.

SURFACESUPPLIED was established in early 2011 with the goal of providing state-of-the-art technology to the commercial diving industry. The founding team has extensive experience in both the supply and manufacture of commercial and military diving equipment. Products…