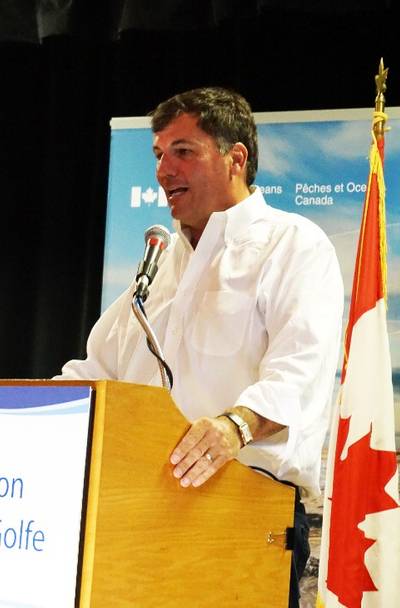 Dominic LeBlanc, Minister of Fisheries, Oceans and the Canadian Coast Guard, announced the creation of the Atlantic Science Enterprise Centre at the Gulf Fisheries Center in Moncton, N.B. (Photo: Fisheries and Oceans Canada)

The Government of Canada is investing to help ensure the country’s fisheries and aquaculture sectors thrive, remain sustainable and healthy, while employing jobs and economic opportunities for Canadians.

Dominic LeBlanc, Minister of Fisheries, Oceans and the Canadian Coast Guard, announced the creation of the Atlantic Science Enterprise Center at the Gulf Fisheries Center.
Over the next few years, Fisheries and Oceans Canada (DFO) will transform the Gulf Region’s regional headquarters building, the Gulf Fisheries Center, into a world class, innovative and collaborative scientific research hub to include interpretive spaces to engage Canadians in marine science and promote ocean literacy.
The Atlantic Science Enterprise Center will foster partnerships between the scientific and academic communities, Indigenous Peoples, business groups, the fishing industry, government partners, nongovernment organizations and the public.
The Gulf Fisheries Center is located in the former College Notre-Dame d’Acadie, which was built in 1948. Acquired by DFO in 1982 to house the Gulf Region’s headquarters, the facility was later designated as a federal heritage building for its architectural, historic and socio-cultural importance. The Gulf Fisheries Center is home to one of the Government of Canada’s four laboratories specializing in the health of aquatic animals, making it an ideal location to increase ocean and freshwater science, and expand research activities in the areas of genomics, harbor and coastal ecosystems, shellfish and wild Atlantic salmon.
“Over the next few years, this historic building will be transformed into an innovative science facility to foster collaboration and offer community engagement. The transformation of this facility demonstrates our Government’s commitment to continuous scientific excellence and innovation, and strengthening connections between people and research activities,” Minister LeBlanc said.
In addition, as of April 1, 2018, the revitalized Gulf Fisheries Center will be the new home of DFO’s national component of the Small Craft Harbors program, which is currently located in Ottawa.
DFO’s Small Craft Harbors program is a federal program responsible for a national network of harbors from coast to coast. Approximately 70 percent of these harbors are located in Atlantic Canada and Quebec. Moving the national component of the program to Moncton will bring it closer to a large majority of its clients, stakeholders and Harbor Authorities.
The announced changes are the first phase of the work to transform the Gulf Fisheries Center into a multi-partner scientific research center. Overall, the Government of Canada is investing $1.8 million to begin this transformation, including important infrastructure investments such as a new roof and improvements to building systems.
In early June, it was announced that the Pacific Science Enterprise Center will be established at DFO’s Center for Aquaculture and Environmental Research in Vancouver, British Columbia.
These two Science Enterprise Centers will expand research activities, make ocean science more accessible, integrate traditional ecological knowledge in research processes and promote community engagement and citizen science.
The Minister also announced that the interpretive public space in the new Atlantic Science Enterprise Center will eventually have the skeleton of a North Atlantic Right whale on exhibit to serve as a reminder of why we must work to protect the health of our oceans and the species within it.
A new partnership with Ingenium, formerly known as the Canadian Science and Technology Museum Corporation, will also support the creation of dynamic interpretative spaces to engage the public at both centers, as well as the production of educational materials. Minister LeBlanc announced that DFO is investing $1 million to support this initiative.
Fernand Proulx, Interim President and CEO of Ingenium - Canada's Museums of Science and Innovation, said, “Together we are aiming to further ocean literacy in Canada by mobilizing Ingenium's staff expertise as creators of exhibitions and interactive experiences making science, technology and innovation, easy, thought-provoking and fun. Working with Ocean School, we will showcase to Canadians cutting-edge research undertaken by scientists at the Department and in schools, and open a window into the science behind the decisions that affect the health and sustainability of oceans. This agreement draws upon the expertise of many organizations including Dalhousie University and the National Film Board, and exemplifies the collaborative approach undertaken by the Science Enterprise Centers.”
• British Columbia • Canada • Canadian Coast Guard
Email