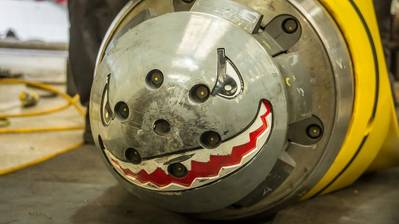 This is the first time that a variant of the SRP Rocksteady subsea mooring connector will be deployed on such a project, following successful qualification and fatigue testing in 2013.The Carnegie project will be the first wave power application in the world to operate with multiple wave power convertors in an array and the first to produce both clean power and freshwater.

The scope of the contract includes three Rocksteady mooring or foundation connectors, with a breaking load (MBL) rating of 2,000 metric tons. They are part of articulated bearing assemblies in a shallow water depth of 30m, situated off the coast of Western Australia. Manufacturing and assembly work will take place in the U.K. and mainland Europe, and the first phase of equipment will be delivered in the first quarter of 2014. The project will require skills from a range of departments within SRP, including design, engineering, quality and procurement.

Alexandre Pichard with Carnegie said, “Carnegie selected SRP for the supply of key cylindrical energy transfer oscillating (CETO) unit components via a competitive tender process that considered proven performance in similar applications, cost and schedule. SRP was very responsive to key selection criteria and demonstrated an appetite to provide an innovative solution to the project requirements.”

Mike Ridgway, head of business development, SRP, added, “This is a significant project award because of the very demanding load conditions of the application. Our Rocksteady connector’s performance, particularly its automatic latching and resistance to bending, torsion and compression, was a key factor in the Carnegie decision to source from SRP. The restricted space available for the connector also required some clever engineering to achieve the client’s specification, including redevelopment of the locking mechanism from a mechanical system to hydraulic hot stab. This contract provides an excellent example of how SRP can overcome challenging engineering issues as well as the versatility and quality of the Rocksteady subsea connector.”