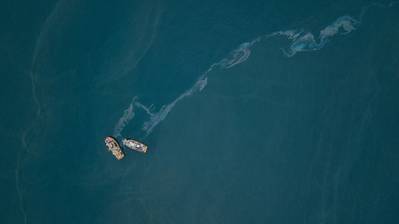 China's Ministry of Transport is planning to establish a laboratory specialising in treating oil spills at sea, the first of its kind in the country, local media Science and Technology Daily reported on Sunday.
China is spending some 200 million yuan a year on researches for emergency treatment of oil spills but the technological expertise has not been widely applied because of lack of such a lab, the report said.
The laboratory is planned in northern port city of Tianjin, off the Bohai Bay, with an initial investment 400 million yuan ($63 million). The investment will go to research projects on oceanic ecological protection and safety issues for sea-borne transportation.
To date, only the United States and France have laboratories capable of undertaking tests and inspections required in treating ocean oil spills, the report said.
The Iranian oil tanker Sanchi collided with a dry cargo vessel early this month about 160 nautical miles off China's east coast, in the world's worst oil tanker disaster for decades.

Strategically located in Great Yarmouth and Aberdeen to serve the on and offshore energy sectors, OAASIS Group Ltd is one of the UK's leading suppliers of PPE and MRO equipment. OAASIS has a strong UK presence and the ability to distribute globally. This has led…