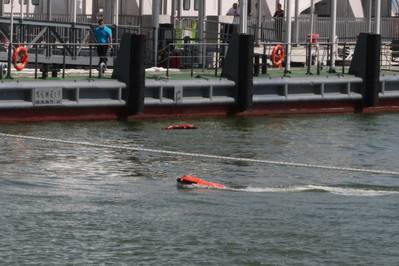 Earlier this month, Zhuhai Jiuzhou Port carried out a series of typhoon-proof reinforcement work for their floating barges. The staff used a small self-powered jet pump device called Dolphin 1 to transport a traction rope, which was attached with the mooring line, to the opposite shore 230 meters away.

After the traction rope was transported to the opposite shore, staff used a forklift to pull the mooring line ashore and tightened it to the pile.

Every year from June to August is the high season of typhoon in Zhuhai. In the Jiuzhou passenger port, only one side of the floating barge is fixed at the pier. When a typhoon strikes, the huge wind and waves will violently flip the other side, causing certain safety risks.

"Before that, if we wanted to tighten the floating barge on site, we needed to put several 250-meter mooring lines, which are very heavy, to the opposite shore,” port management said. "There is a lack of suitable small workboats in the port because we only dock large passenger ships. The cost of transferring a work boat from other places is high and the operation is quite complicated.”

In its recent mission, the staff set up four lines with the assistance of Dolphin 1 in about an hour's time.

"Not doubt that the Dolphin 1 is the answer to our problem," port staff said.

Dolphin 1 is a remote control self-propelled water surface vehicle that can be operated by a single person. With a little guidance, users can quickly get started. It has a large load of 150kg and a remote control distance of 500 meters, which makes it not only used as a quick rescue device, but also solves most lightweight water transportation tasks, greatly reducing personnel and operating costs, and improving operational efficiency.

EdgeTech has promoted Gene Andella to the role of Customer Service Manager. Andella has worked with EdgeTech for over seven years.