The Art of Coastal Engineering in the Louvre Abu Dhabi 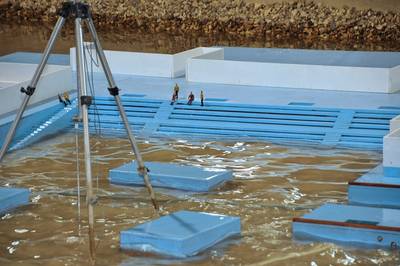 The Louvre Abu Dhabi, which opened its doors on November 8, 2017, has been described as floating on the waters of the Gulf.

This effect, part of the architectural vision of its award-winning architect, Jean Nouvel, who has created a museum-city in the sea, is fashioned by having water levels lying close to the line of sight. In its Oxfordshire laboratories, HR Wallingford created a 3D physical model of the museum which could accurately reproduce the hydrodynamics of the proposed site to allow for collaborative working between Architect and Coastal Engineer to optimise the architectural design.

The unique design of the flagship museum – portrayed by the Louvre Abu Dhabi as an archipelago out at sea - meant that it required a design able to withstand varying water levels, as well as one able to tolerate any long term rises in sea levels. HR Wallingford worked closely with BuroHappold Engineering (BHE), who were appointed by the Tourism Development & Investment Company (TDIC), an agency of the government of Abu Dhabi, to create a large scale wooden segmented model.  The model was built  at a scale of 1:20,  to provide the flexibility and high precision needed to test the design, while accurately reproducing different wave and water levels.
Dr Tim Pullen, Principal Engineer in Coastal Structures at HR Wallingford, said: “Having a segmented model meant that we could rearrange, add and remove elements of the model, to establish an optimised version of the model for testing.  The agreed, modified model was then tested with all wave conditions and water levels to establish the performance of the structures under normal tidal, as well as under storm conditions.”
The model of the Louvre Abu Dhabi included onshore and offshore structures. Onshore structures included the steps up to the museum which are partially submerged, planned walkways, as well as areas of a restaurant that is open to the sea. Offshore structures included submerged walls and reduced water depths, plus aesthetically-placed emergent structures that, in combination, attenuated the wave heights.
The Louvre Abu Dhabi project came about in 2007, when France and the United Arab Emirates came together to develop a unique cultural project, a universal museum, the first of its kind in the region, combining in its architecture by Pritzker prize winning architect Jean Nouvel, French design and its Arabic heritage.
• France • United Arab Emirates
Email