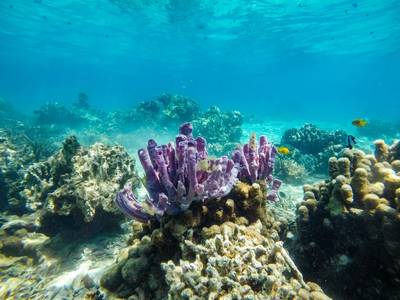 Coral reefs in the western Indian Ocean are at risk of extinction by 2070 due to warming temperatures and overfishing, according to a new study.

A roughly 12,000 sq km expanse of coral reefs stretching down the eastern coastline of Africa and around Madagascar is facing ecosystem collapse, threatening a range of species and the livelihoods of over a million people who work in the fishing and tourism industries. These reefs make up around 5% of the planet's total coral reef area.

"When an ecosystem collapses, we might still see individual fish or corals but the whole system is no longer effective in supporting either marine biodiversity or communities who are dependent on it," said David Obura, a Kenyan marine ecologist at CORDIO East Africa and lead author of the study.

Published in the journal Nature Sustainability, the study found warming temperatures to be the main driver, especially in the region's island nations like the Seychelles, while unsustainable fishing practices were the main culprit near the mainland.

Mass bleaching events and marine heatwaves have wiped out 14% of the planet's coral reefs between 2009 and 2018, according to the Global Coral Reef Monitoring Network. Oceans absorb excess greenhouse gas emissions and their surfaces have warmed by a global average of 0.13 degrees Celsius every decade for the past 100 years, according to the U.S. National Oceanic and Atmospheric Association.

Environmentalists have called for governments around the world to step up marine protection and abolish subsidies for the fishing industry, which they say have depleted wild fish stocks and pushed marine ecosystems to the brink of collapse.