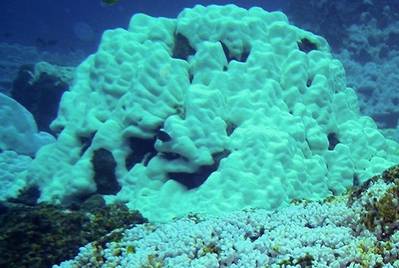 A recent  NOAA-funded modeling study shows that widespread bleaching events, like the one in Thailand in 2010 and pictured here, will become more common in the future. However, the study also found signs that corals may be adapting to warming—the question is if it can be fast enough to keep up with the rate humans are burning fossil fuels.

Warm water can contribute to a potentially fatal process known as coral bleaching , in which reef-building corals eject the algae living inside their tissues. Corals bleach when ocean waters warm just 1-2°C (2-4°F) above normal summertime temperatures. Because those algae supply the coral with most of its food, prolonged bleaching and associated disease often kills corals.

This study explored a range of possible coral adaptive responses to warming temperatures previously identified by the scientific community. It projected that, through genetic adaptation, the reefs could reduce the currently projected rate of temperature-induced bleaching by 20 to 80 percent of levels expected by the year 2100, if there are large reductions in carbon dioxide emissions.