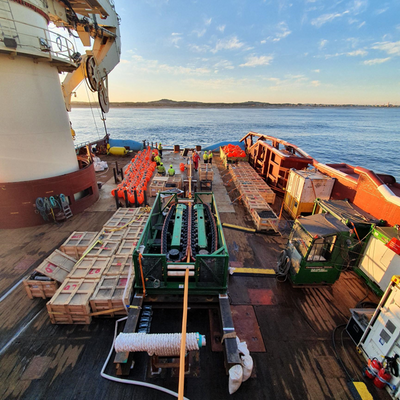 The 100-tonne cable was installed using the Maersk Achiever vessel and will provide power and data connection from an on-land substation in Aguçadoura to the wave energy demonstration site 5.5km offshore.

Now connected to the national grid of Portugal, the site will initially accommodate the recently unveiled CorPower C4 Wave Energy Converter (WEC) which will later form part of a larger four-system array, and "one of the world’s first grid-connected wave farms."

CorPower Ocean Marine Operations Manager Robert Argo said: "We started the [cable] installation process by positioning the Maersk Achiever in a safe water depth within the cable corridor, approximately one kilometre offshore. A messenger line was passed from an onshore winch to the Maersk Achiever, and then connected to a cable pull-in head.

"As the cable was being deployed, buoyancy was attached to assist with the cable float into shore. Once onshore, the cable was pulled through a pre-installed cable conduit running under the beach and into the on-land substation, while the remaining cable was deployed using an onboard cable tensioner."

“During the lay operation, cable protection was added to provide additional mass where required for on-bottom stability. Various parameters were also monitored throughout including cable tension, cable departure angle and touch down monitoring. On completion, a visual and positioning survey was carried out by a remotely operated vehicle. 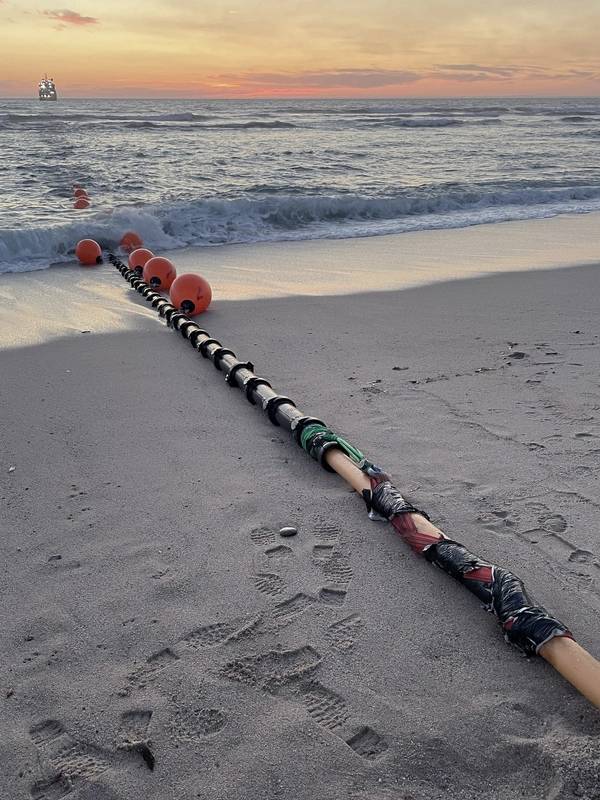 “The cable lay process is a notoriously challenging aspect for marine energy projects, with much planning required and adaption to weather windows and ocean conditions. We are thankful to our highly diligent and professional partners, including Maersk Supply Service for their close support throughout the entire operation.”

CorPower is now gearing up for the arrival of the C4 PTO (Power Take Off) system, which has completed a one-year dry test programme in Sweden. Once transported the PTO will be integrated with a composite hull, which was custom built at CorPower Ocean’s Portuguese base, in Viana do Castelo – home to its innovative Composite Hull Development Programme.

The CorPower C4 WEC will later be fused to the cable through a quick-connect interface located at the anchor-head. While providing power connection to feed electricity to shore through the 7.2kV cable it will also deliver high speed communication to the wave farm through fibre optic cores.

The CorePower wave energy converters are of the point absorber type, with a heaving buoy on the surface absorbing energy from ocean waves and which is connected to the seabed using a tensioned mooring line. The device oscillates in resonance with the incoming waves, amplifying the motion and power capture.

DeepOcean, Akvaplan-niva to Use ROVs, USVs for Environmental Studies in Offshore Energy Space