Decommissioning: Corals on Oil Platforms Could Kick-start the Deep-sea Ecosystem

In the late 1990s, the cold-water coral Lophelia pertusa was first reported growing on the legs of oil platforms in the northern North Sea. As these platforms reach the end of their operational lives, many are being decommissioned and brought ashore. What happens to the coral, asks Murray Roberts, Changing Oceans Research Group, University of Edinburgh.

Huge efforts have gone into safely recycling the steel and other materials from the platforms, but no plans have been developed to use the coral that have grown on them. They don’t survive in air and quickly die before being removed from the platforms during decommissioning. But rather than becoming a waste problem, the 40-plus years of coral growth give a fantastic opportunity – they could be transplanted to areas where corals used to flourish and allowed to regenerate biodiverse marine ecosystems.

Lophelia pertusa is an ecologically important cold-water coral listed by the Convention on Trade in Endangered Species. Corals are animals formed from thousands of individual coral polyps. They are closely related to sea anemones, but unlike anemones, they produce a skeleton. Lophelia is known as hard coral because it builds its skeleton from aragonite, a very tough form of calcium carbonate – in fact the aragonite secreted by Lophelia is one of the hardest forms of calcium carbonate known to science. 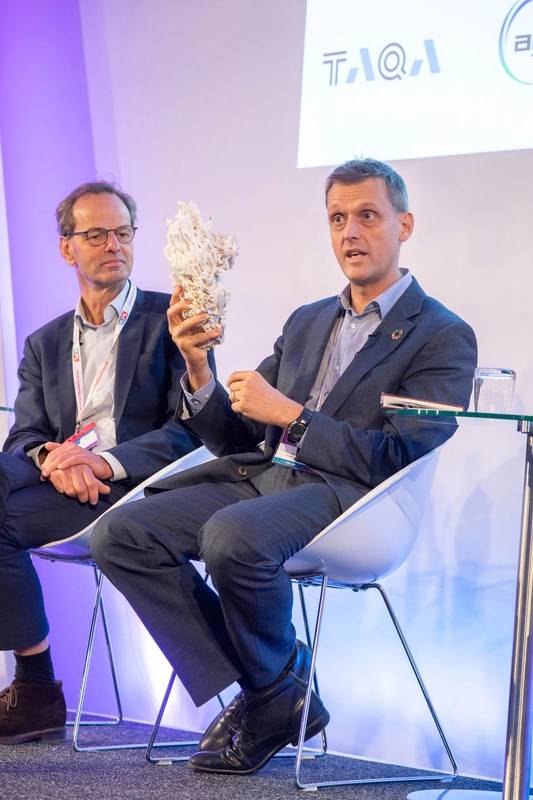 Murray Roberts, Changing Oceans Research Group, University of Edinburgh, holding an example of Lophelia pertusa. Photo from Oil & Gas UK.Atlantic coral supporting coral off Norway, via North Sea platforms
Corals like Lophelia reproduce by spawning eggs and sperm into the seawater, where they combine to form tiny larvae. These larvae may live for up to six months and disperse over huge distances in ocean currents. In fact, it’s likely the corals on the North Sea platforms settled as larvae spawned from deep-sea coral reefs along the Atlantic margins west of Scotland and the Shetland Islands. At the University of Edinburgh, we’ve used computer models to simulate where the larvae spawned from North Sea platforms might go and discovered some are likely to feed into coral conservation areas off Norway.

After a Lophelia larva settles, it transforms into a tiny polyp that then extends its tentacles to catch food particles. Roughly once a year, the polyp will divide, producing new daughter polyps that grow to form a colony. These coral colonies grow up above the seafloor giving the polyps a better chance of catching food. Dead coral colonies accumulate beneath the live coral, and over hundreds to thousands of years this process creates deep-sea coral reefs that support many other animal species and provide spawning sites for vulnerable fish like deep-water sharks, skates, and rays.

Scientists have known that corals like Lophelia thrived in the deep northeast Atlantic since the 19th century when they first used steam-powered dredges to explore what lives in the deep sea. During the HMS Porcupine expedition in 1869 and 1870, the densities of cold-water coral reefs west of Shetland made such an impression on Charles Wyville Thomson that he wrote “at depths of 300 to 600 fathoms the handsome branching Lophohelia prolifera [Lophelia pertusa] forms stony copses covering the bottom for many miles”.

Disappearing reefs
However, decades of bottom trawling in the deep North Atlantic have done untold damage to cold-water coral reefs, and it is now hard to find evidence of these stony coral copses where Wyville Thomson first reported them. In response to this damage, marine protected areas and other controls on bottom fishing in the deep sea are being used – but in our rapidly changing ocean, these measures aren’t sufficient.

As everyone knows, the ocean covers 70% of Planet Earth, and it is the ocean that lies at the heart of the Earth’s climate and weather system. The ocean has absorbed over 90% of global warming and around 25% of anthropogenic carbon dioxide emissions. This means that the ocean is now warming, becoming more acidic, and holding less oxygen. All this creates fundamental changes in how suitable the ocean environment is for marine life, and vast areas of the Atlantic Ocean that used to be suitable for cold-water corals are becoming unsuitable.

Just as on land and in the shallow seas, we are embracing tree planting, saltmarsh, or oyster reef restoration to rebuild ecosystems. We need creative thinking to restore and rebuild deep-sea ecosystems, and the areas we restore must be in places resilient to changing ocean conditions. 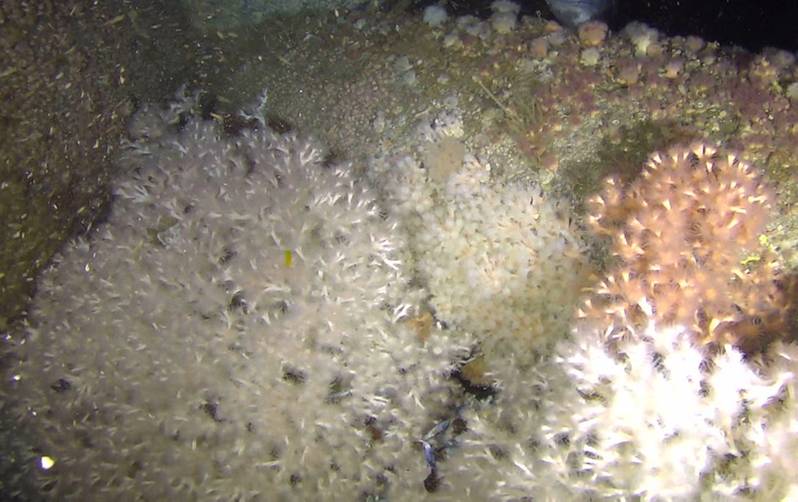 Marine growth on a northern North Sea platform: White and orange colour varieties of the cold-water coral Lophelia pertusa on a northern North Sea platform. Above the coral colonies, this platform is colonized by other animals, including several species of sea anemone. Image courtesy Murray RobertsTransplant coral-covered platforms to climate refuges
The coral colonies that have grown on North Sea oil platforms represent a once-in-a-lifetime opportunity to restore deep-sea ecosystems. In 2009, estimates suggested that over 1,500 tonnes of coral (wet weight) were present on the conductors from just one platform – and since then the corals have continued to grow extending by about 2-3 cm a year. Rather than destroying the decades of growth since the 1970s, we should transplant living corals to climate refuges along the northeast Atlantic. We don’t need to rebuild reefs. We simply need to safely transplant coral colonies to sites above the seafloor so they can continue to feed, grow and reproduce. If we rebuild the network that used to be there and control any future destructive human activities, we can let nature takes its course, and the corals will disperse, grow and rebuild the reefs.

Industrial expertise to design and deploy coral restoration units will be essential. For example, it might be feasible to adapt low-cost torpedo moorings to deploy coral colonies and give them an optimal position to feed and grow above the seafloor. Any restoration must be monitored, and restoration units close to offshore industry installations could be monitored during maintenance and inspection activities. We also need to recognize the role these corals now play in the North Sea ecosystem and take this into account when deciding on platform decommissioning strategies.
We have now entered two closely linked United Nations decades of ‘ocean science for sustainable development’ and ‘ecosystem restoration’. But we can only achieve the goals of these decades and deal with biodiversity and climate crises if we come together across industry, academia, and government to think differently about our role in the environment and how we can work together to be agents of positive change. Human activities and ingenuity can and must now be harnessed to rebuild and restore marine ecosystems. 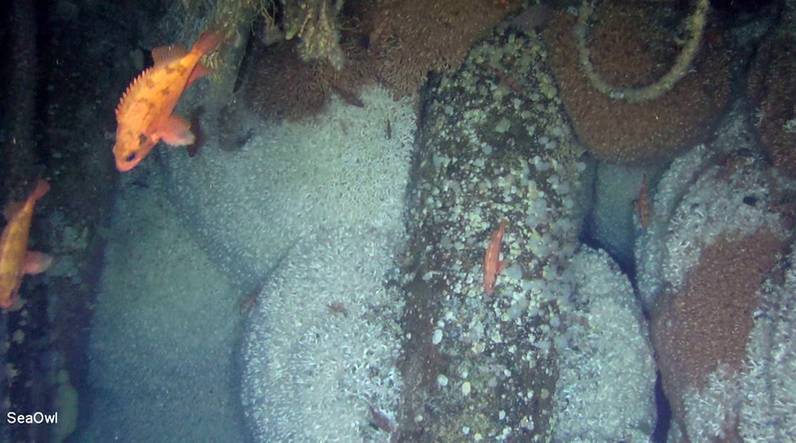 Marine growth on a northern North Sea platform: Large mixed colonies of Lophelia pertusa can intermingle as they grow. Above the corals are redfish, likely to be Norway redfish (Sebastes viviparus). Image courtesy Murray Roberts