Leak Detection Sonar Deployed in the US Gulf 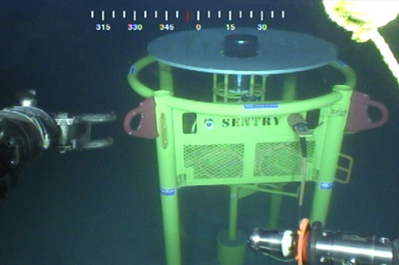 Sonardyne’s Sentry IMS in the US Gulf of Mexico (Photo: Sonardyne)

A sonar monitoring system will help a major US oil company to reinforce its deepwater offshore asset integrity assurance in the US Gulf of Mexico.

The system, a wide-area Sentry Integrity Monitoring Sonar (IMS) developed and delivered by subsea engineering specialist Sonardyne International, has been deployed on the seafloor at more than 2,000 meters water depth.

The ROV-deployable Sentry IMS,  which features a titanium housing and can be installed short-term or permanently, is able to detect, classify and localize subsea releases of hydrocarbons from either the seafloor or oil and gas field production infrastructure, its developer said.

In this latest deployment, Sentry is being deployed under a six-month trial that will demonstrate its ability to provide real-time subsea asset monitoring. The Sentry sonar head, which is mounted on a seafloor lander, is connected into an existing power and communication umbilical to a floating production facility. During operation, inbuilt intelligence using algorithms developed by Sonardyne continuously assess the sonar data gathered by Sentry and generate near real-time automatic alerts of any hydrocarbon seeps detected in the water column.

As part of the trial deployment, simulations of an oil plume in the water were created, using nitrile-fiber strands, proving fast and accurate detection and classification of the equivalent release of 100 barrels/day of oil out to 244 meters, a distance only constrained by the trial environment. This was achieved within seconds of the simulated leak occurring. Sentry’s capability, however, covers 100 barrels/day mono-phase oil leaks at distances of up to 740 meters. For mono-phase gas leaks, the system is capable of detecting down to just 1 barrel/day at 500 meters or 100 barrels/day (as measured at depth) at 1,000 meters.

According to Sonardyne, the system's ability to accurately localize leaks is unique to the Sentry system

This latest deployment follows battery-powered deployments of the Sentry system by other major international and independent operators, in the US Gulf of Mexico and offshore Papua New Guinea. Sentry has also been used in the UK, where it demonstrated its ability to detect carbon dioxide leaks from the seafloor as part of an offshore carbon capture and storage (CCS) demonstration project.

Stephen Auld, Global Business Manager for Asset Integrity Monitoring at Sonardyne, said, “For deep water, hard to access fields, robust field management philosophies are essential for operators to assure the ongoing integrity of their systems. Having access to reliable near real-time warning systems that are able to identify and locate sources of leak events, should they happen, is a significant benefit to both the environment and offshore exploration and production companies.”