During the past two decades, scientists have learned how hypoxia and acidification can act and interact to harm marine organisms.  Hundreds of low oxygen or dead zones have been identified across the globe.  Ocean acidification, a process resulting from the continued buildup of increasing atmospheric carbon dioxide in the oceans, has been discovered.  And yet, regulation of dissolved oxygen (DO) and pH in coastal waters have remained unchanged.

The Clean Water Act aims to restore and protect the waters of the United States from impairment; waters that do not meet state standards are listed as impaired, a designation that can initiate critical remediation actions. According to Dr. Gobler, the current saltwater DO and pH criteria of many states allow for harmful conditions to persist without amelioration. “Our understanding of the dynamics of DO and pH and the effects on marine life have advanced dramatically this century to the point that it is now clear that criteria for pH and DO are likely to leave important marine species vulnerable to harm”, he said. 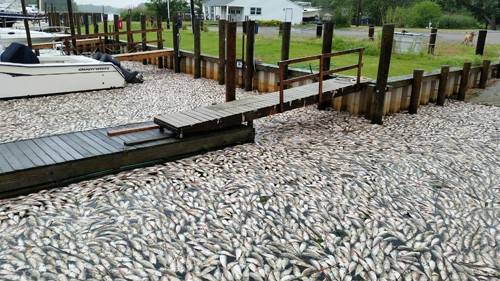 Fish kill in Riverhead, NY, that occurred as a consequence of low oxygen.  Tomasetti and Gobler outline the manner in which current environmental policies make these events more likely to occur in the future without policy change

The reduction of DO and pH in coastal waters can individually have adverse effects on aquatic life, however, current regulations do not consider the combined effects of these stressors which are often experienced in combination and can be more severe than each stressor individually. Not until the scientific field of Ocean Acidification had been established, had their combined effects been broadly considered.

Environmental experts working to protect marine life see the need for better protection of coastal ecosystems.  "Together ocean acidification and eutrophication are a double whammy, reinforcing each other – and increasingly harming marine and aquatic life.”, said Dr. Lisa Suatoni, Deputy Director of the Oceans Division at the Natural Resources Defense Council.  She went on to state, “Tomasetti and Gobler cogently present an emerging truth: to address this combined impact, we need to reexamine our current regulations and the criteria we use to assess water quality.”

The Policy Forum suggests that by incorporating recent acidification-research into DO and pH policy, further improvements to coastal ecosystems are achievable. Many coastal states have established advisory groups consisting of researchers, stakeholders, and state officials to share information on the issue of coastal acidification. “We believe that continued collaboration between scientists, community members, and all levels of government can revitalize our coastal waters,” said Tomasetti. “Revising DO and pH criteria to reflect the latest science are important actions that will leverage the existing nationwide efforts to improve water quality and will help to produce and maintain the best possible outcomes.”