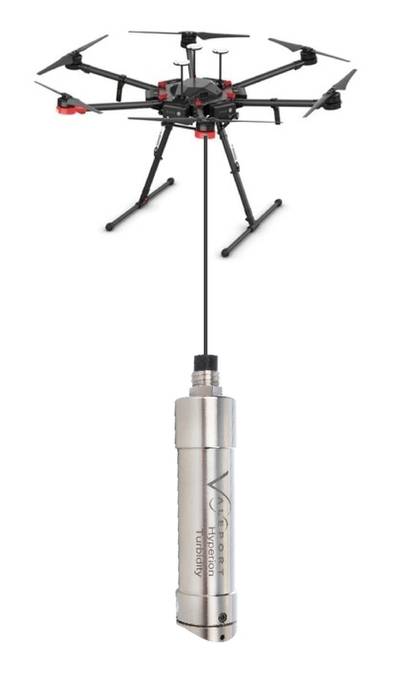 A new system for autonomous airborne hydrographic survey has been launched by THURN Group. The THURN QuickDip system of data collection uses aerial drones to carry Valeport sensors on pre-planned survey routes to deliver an efficient and repeatable method of gathering survey data from inaccessible or dangerous waters.

THURN Group developed the innovative QuickDip technology for inland and coastal water-ways to offer a range of benefits including: rapid data collection from multiple sites of interest, repeat-able map-based surveys to monitor change detection, the ability to safely collect data from difficult-to-access and dangerous waters as well as restricted-access waters, such as reservoirs.

“We’re launching the THURN QuickDip with the miniSVS and Hyperion range of Valeport sensors which are respected for their high levels of accuracy, but this is just the first in an expanding range of drone-dipped sensors for coastal and inland water survey,” said Tom Hiller, General Manager, THURN Group. The range of optical sensors from Valeport are being offered as part of the QuickDip system, including the Hyperion range of environmental sensors for the measurement of Turbidity, Chlorophyll a, Fluorescein, Rhodamine or Phycocyanin as well as their popular miniSVS and SWiFT SVP.

The new SWiFT CTD is the next generation of Valeport’s SWiFT profiler range, designed to deliver enhanced accuracy and versatility.The…

MacArtney supplies a 12-unit turnkey solution for the Danish EPA