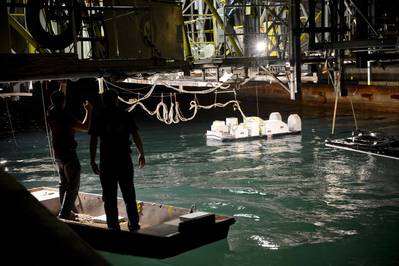 SSC is the replacement for the Navy's existing fleet of Landing Craft, Air Cushion (LCAC) vehicles, which are nearing the end of their service life.  SSCs - like the LCACs they replace - will be primarily used to haul vehicles, heavy equipment, and supplies through varied environmental conditions from amphibious ships to over the beach.

"All new Navy platforms, such as the SSC, are required to undergo a comprehensive Test and Evaluation program to assess technical and operational performance prior to full-scale production. This allows the Navy to resolve any potential problems prior to deployment," said Gerald Lawler, NSWCCD Senior Vulnerability Analyst.   "A platform's performance - with respect to survivability - typically falls under the responsibility of the Live Fire Test & Evaluation [LFT&E] program for the system.  For SSC, we're leading a multi-year effort to assess the craft's survivability, and just completed testing on one of the craft's Key Performance Parameters, or KPPs."
Carderock's David Taylor Model Basin building is 3,200 ft. long; houses high-speed- and deep-water-basins; and uses pneumatic wave makers.  The SSC model - using a skirt system developed by NSWC Panama City Division - was free to drift under a moving carriage in the basin, and moved through waves of different sizes.

"For the survivability KPP test, we created a set of target wave conditions and collected measurements as the model encountered these waves in a 'dead in the water' condition" said Larry Snyder, NSWCCD Naval Architect.  "Instrumentation was used to measure the motion and global loads. Pressure panels at select locations on the craft were used to measure the pressure due wave slap.  We'll compare the loads we measured in the basin to the design loads of the craft.  The data generated from this tests will help us extrapolate out to the anticipated lifetime of the craft and will aid in post-test numerical predictions."
By evaluating these requirements, the Navy can determine if craft will remain structurally adequate and mission capable in the "dead in the water" condition through its expected lifetime.
"This seakeeping and survivability test was the third major test performed for the SSC LFT&E program.  Over the next several years, additional testing will be conducted to evaluate the craft's susceptibility, vulnerability, and recoverability to various threats," said Lawler.

The SSC Program requirement is for a total of 73 craft (one test and training, and 72 operational craft). Deliveries are expected to begin in fiscal year 2017, with initial operational capability projected for fiscal year 2020.
Research in ship design is tied to NSWCCD's technical capability in hull forms and fluid dynamics. Under this capability, NSWCCD provides the Navy's hydromechanics capability for surface and undersea platforms.  To learn more about the 132 technical capabilities across the NAVSEA Warfare Centers, visit: