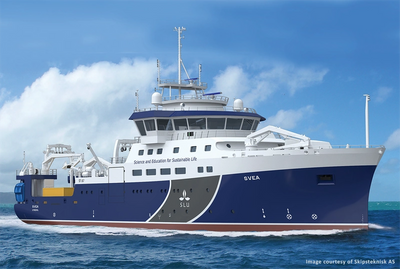 A new research vessel being built for the Swedish University of Agricultural Sciences (SLU) will be used by the university and the Swedish Meteorological and Hydrological Institute (SMHI) for a wide variety of environmental surveys, from monitoring ocean acidification to assessing fish stock.

The newbuild, to be named RV Svea and delivered from Armon Shipyard in Spring 2019, will feature a range of high-tech equipment, including a Moving Vessel Profiler (MVP), announced Canadian instrumentation manufacturer AML Oceanographic.

By including a MVP on the new vessel, the scientists expect to gain a clearer understanding of the oceanographic dynamics encountered in the Baltic Sea, such as strong halocline layers and anoxic waters. Furthermore, the high data density that MVP can provide will improve the data quality from the many hydroacoustic measurements conducted on RV Svea and make SMHI’s oceanographic models substantially more accurate, according to AML Oceanographic. The MVP200 will collect CTD, Dissolved Oxygen, Chlorophyll A data continuously and in real-time while the vessel travels at 10-11 knots, making it the sole solution capable of providing an accurate characterization of such a complex environment.

“Until now we have only been collecting profile data from the water column by conducting traditional CTD casts where you need to stop the vessel to make a cast. Ship time is very expensive, and the vessels are often on a tight schedule. On top of that, the staff is already busy and doesn’t have a lot of time for extra work. So it is not easy to collect several extra CTD-profiles during a cruise. However, with a MVP200 we expect to be able to significantly increase the number of profiles without adding cruise time or extra work,” explained Daniel Bergman Sjostrand, Oceanographic Engineer at SMHI.

AML said the contract was secured through its local agent in Spain, Casco Antiguo.

MVP systems have been provided to organizations around the world seeking to reduce the technical and financial unpredictability of hydrographic and ocean science surveys. Due to strong demand for the solution, AML has expanded its Nova Scotia operations and relocated to a new customized production facility to accommodate a higher volume of MVP builds.

When the U.S. Navy needed to ensure the recovery of the AN/UQQ-2 Surveillance Towed Sensor System (SURTASS) in case of loss at sea…