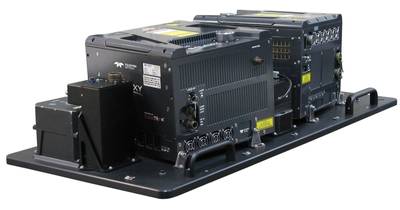 Teledyne Optech has announced they have signed an agreement with Aerial Surveys International (ASI) to sell a Galaxy T2000, upgrade their existing Galaxy Prime to a Galaxy T2000 and install both sensors in the productivity-doubling G2 Sensor System.

The Galaxy T2000 is engineered to point all its 2 million laser shots per second to the ground within a programmable field of view, thereby achieving the highest single-pass point density in the market.  With faster scanning at up to 320 lines per second and the smallest laser footprint, the T2000 provides a new, unparalleled level of performance for applications involving small-object identification such as wire detection as well as foliage penetration.

The G2 Sensor System features the unique compact form of the ALTM Galaxy, enabling maximum configuration flexibility with the option to install and operate two sensors as one system into a single aircraft portal. The G2 Sensor System uses the same Galaxy production workflow that processes, calibrates, co-registers and outputs survey-grade LAS files from both sensors simultaneously.

The British Royal Navy said it has taken delivery of its third and final autonomous minehunting boat.RNMB Hebe, named after…