December 2019 marked the one-year anniversary since University of Tasmania sent ISE built AUV nupiri muka to Antarctica as part of the Antarctica Gateway Partnership. While there it successfully completed many survey missions under the Sørsdal glacier. What better way to celebrate this accomplishment than to send it back for a victory lap this year!

Under ice missions can be notoriously difficult, and ISE has built up a wealth of experience in the 25+ years since it began sending vehicles to the polar regions. In addition to the most recent Antarctica mission, ISE’s AUVs have been to the Arctic multiple times. Notably, two of ISE’s AUVs created for Canada’s Project Cornerstone completed 1000km of under ice survey in 2010, and for Project Spinnaker ISE-built Theseus laid 100s of kilometers of fiber optic cable.

A multitude of factors led to these successful operations, and in this article we’ll discuss some of the inherent dangers of working under polar ice and how they were mitigated.

Why are under AUV missions challenging?
Every time an AUV descends to explore unknown regions, there is a 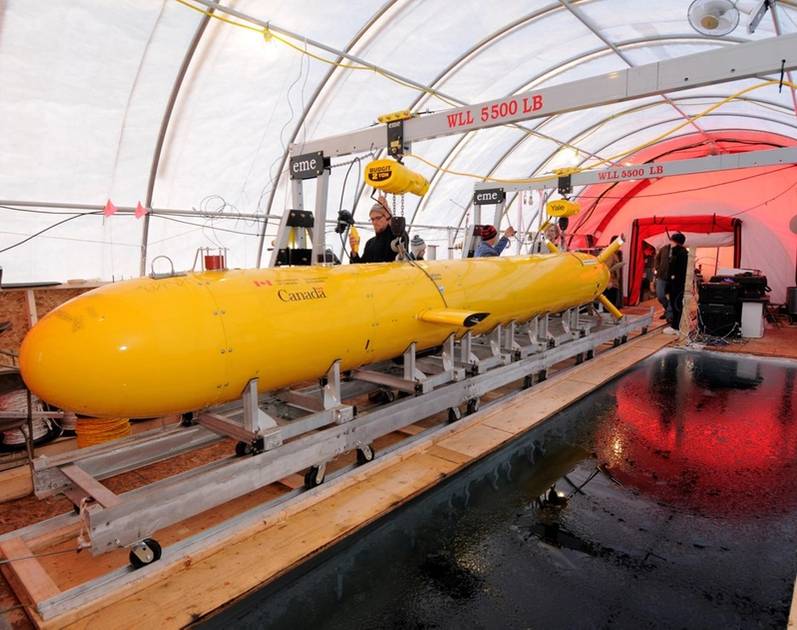 Photo: International Submarine Engineering Ltd. chance it can be lost. Even for AUVs the ocean is not a friendly place. The terrain it navigates is only partially mapped at high resolution; we know more about the surface of Mars than we do about our ocean floors.This said, there are ways to minimise the risks. There is always safety at the surface for example. If an AUV is designed to be slightly buoyant with emergency drop weights to make it even more so, then it can simply float to the surface in case of emergency. The AUV also has a suite of sensors to help avoid obstacles and the ocean floor itself so that it can react to the terrain below and in front of it.The position of the AUV is almost always known with USBL tracking and can be communicated with via acoustic communication during the whole operation. This allows the pilot to make critical decisions to help keep the AUV safe.

Why are under under-ice missions challenging?
Being under polar ice makes the consequence of failure so much higher. You do not have the safety net of the surface to return to anymore, there is less known about the terrain and there is limited to no communication with the AUV. Any time it encounters difficulty it must have systems that allow it to recover on its own, with no human intervention.

On top of this, USBL tracking does not work well. If something goes wrong, you don’t know where the AUV is and it is likely not recoverable. Not only do you lose a multi-million-dollar asset, but you can’t find out what went wrong in order to improve it for next time.

Even after a successful mission, recovery is not a sure thing as the nupiri muka found out in on its travels in Antarctica. Each day it had to transit back to Davis station through waters full of floating icebergs the size of cars.

Sometimes the only access to the survey location will be via a small hole in the ice that moves multiple kilometers per day, as experienced on the Cornerstone missions.

This puts a lot of pressure on ensuring that the mission plan is correct and the AUV can react to all situations appropriately. 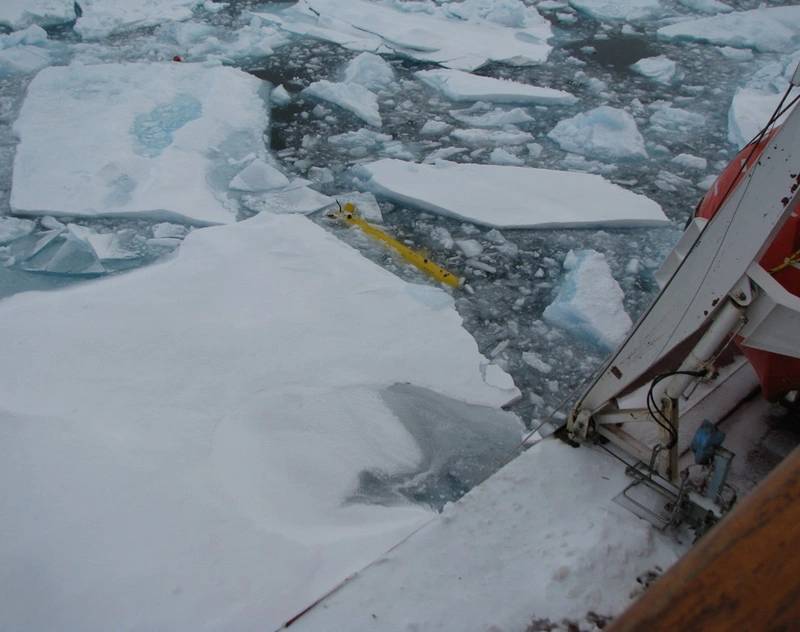 Advanced Autonomy: Without the relative safety of the surface, this is the main tool ISE uses to keep its AUVs safe. It gives the AUV the ability to make contextual decisions at different stages of the mission plan. There are many scenarios that can interrupt the mission and change the AUV’s objective, for example if an emergency arises and it needs to abort mission via the safest route. Based on set parameters the AUV can determine where the most suited one is. Early on in the operation this could be simple as there might be minimal obstructions, however in an unknown area under ice the safest option might be to return the way it came rather than other, possibly shorter options. While under the Sørsdal glacier this is precisely the kind of autonomy nupiri muka was outfitted with. As the glacier is coastal there are many locations where the shallow waters could restrict its movement so being able to change its behavior based the depth of the water is essential.

Additionally, if one of the AUV’s sensors malfunction it can react in several ways depending on how critical the malfunction is: it can switch to a backup sensor or return home. Other important autonomous features include monitoring of energy levels and ensuring the AUV returns home before its batteries run out. In addition, having geographical bounding and timers for each section of the mission ensures that the AUV can react if it’s taking too long to complete segments or heading out of mission territory.

Robust Hardware: having the right hardware is another important way to mitigate risks. For example, nupiri muka was outfitted with a multibeam obstacle avoidance sonar that allowed it to see not only what was in front of it but what was below and above it as well. Its avoidance algorithm was designed to react appropriately depending on where the obstacle was, as simply rising and turning starboard is not always a safe option.

To improve navigational accuracy nupiri muka was also equipped with a DVL for following the ice in addition to one following the ocean floor. Without this it would very quickly lose positional accuracy and may not be able to make its way home. The vehicle also had an extra acoustic modem pointing downwards to help improve communication for situations where the AUV was close to the surface ice. The more the pilot can help the AUV the higher the chance of success.

For Project Cornerstone the AUVs were deployed through an ice hole that moved multiple kilometers per day. The vehicles were outfitted with a homing system that could help them find their way home even from 100km away. They were also outfitted with a variable ballast system to give them the ability to park under ice and wait for an ROV to transport them the final distance to the ice hole. To minimise risks of launch and recovery, these AUVs were also outfitted with underwater connectors for charging and data download.
All of this hardware needs to be tried and true - mature designs, used for years to ensure their reliability. Even one failed system can make or break a mission.

On to success.
As we can see, there were many contributors to successful under ice missions. Most discussed were in the vehicles themselves but it is important to remember the planning and experience needed too. Every time the vehicle is sent out, its mission plan it should be carefully reviewed by individuals with polar experience. With this in mind – plus some blood, sweat, tears and maybe a little luck - there is no reason why there won’t be many more successful polar missions in the future.

The Authors
Luke Alden BSc Mechanical Designer at International Submarine Engineering Ltd. Luke has 10+ years experience in engineering. During his time at ISE he has been involved in many design projects including integrating cameras on AUVs. 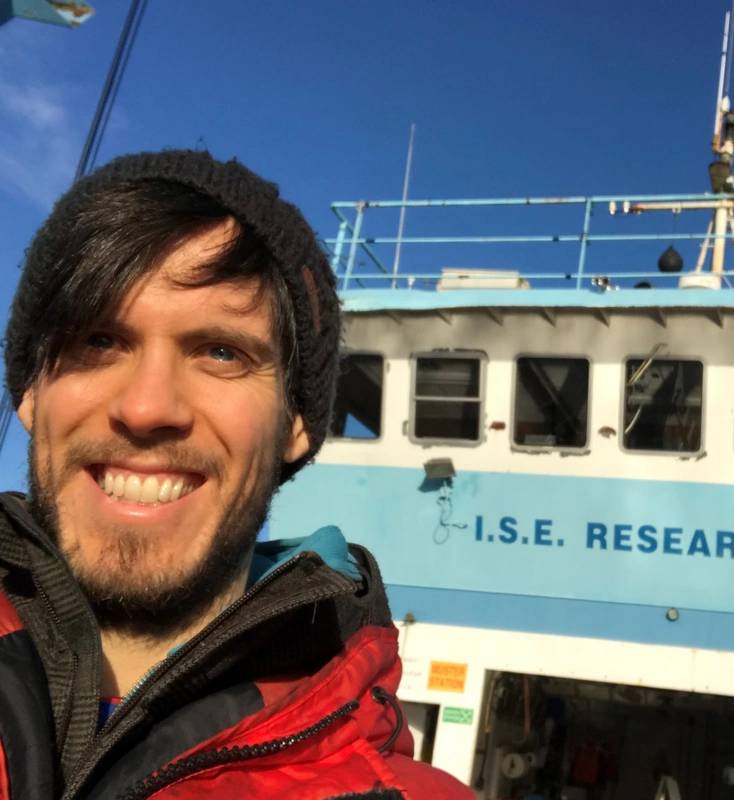 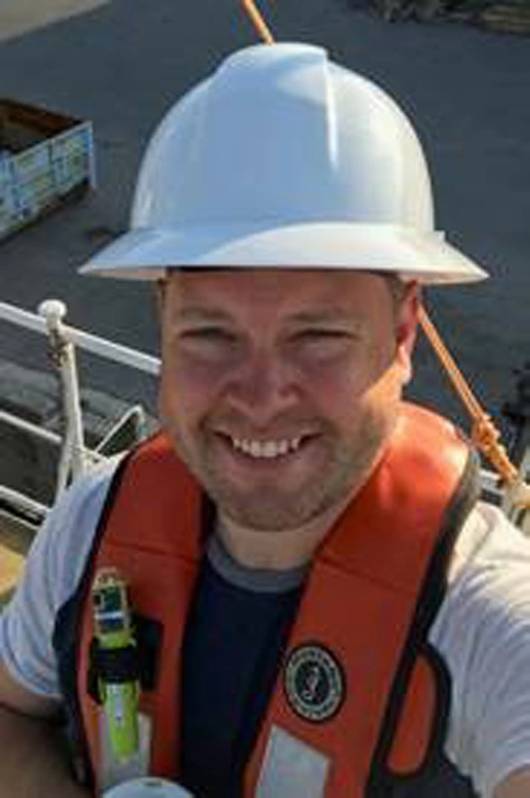