Finns Want to Carve Trump’s Face on a Glacier 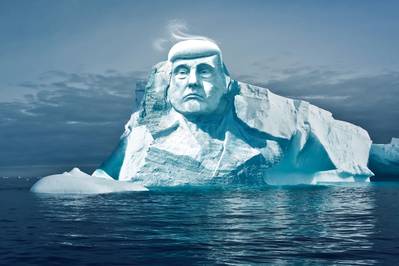 President Donald Trump reportedly told South Dakota Representative Kristi Noem it is his dream to be added to Mount Rushmore.

There might not be space for the 45th American president’s likeness alongside some of his most immortal predecessors on Mount Rushmore, but a group of Finnish environmentalists say they want to fulfill Trump’s dream in a different way.

Members of a Finnish NGO say they want to commission Project Trumpmore, a 115-foot-tall ice sculpture of Donald Trump’s face onto an arctic glacier inspired by the iconic South Dakota monument and Trump’s rejection of climate change and global warming.

The monument, they say, will be a temporary – a physical, melting demonstration of climate change.

“There are still people who ponder whether [global warming is] a real issue,” said Nicolas Prieto, the chairman of the association Melting Ice, the group behind Project Trumpmore. “We want to build the monument for all of us, so we can see how long the sculpture lasts before melting. Often people only believe something when they see it with their own eyes.”

President Trump, an unabashed climate change skeptic, has repeatedly denied the effects of climate change and global warming, and has often taken to Twitter to voice his views on the matter:

“Instead of filling the world with fake news and alternative facts, this project aims to actually show climate change taking place,” the Melting Ice group said in announcing Project Trumpmore.

“Our starting point was to create something concrete, something people can see and something that makes climate change visual,” Prieto said.

The group said it is currently searching for a suitable arctic location for ice sculptors to build Trumpmore. Estimated building will take four weeks, and the process will be documented and broadcast via a live feed.