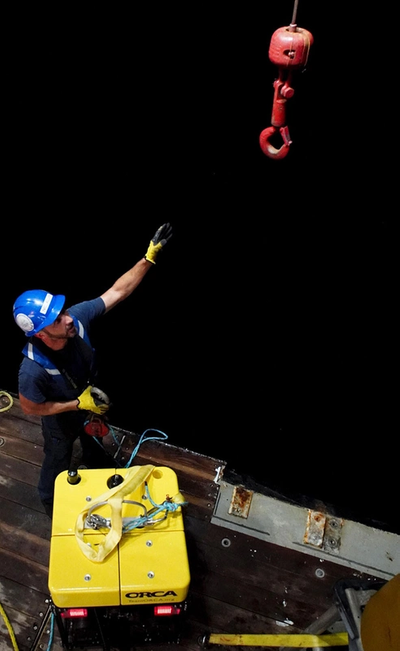 Scientists are usually pictured on screen as sober and humorless types, pre-occupied with numbers and empty facts. However, nothing could be further from the truth, at least among the scientists we know.

We are deeply passionate about our fields, sometimes to the point of obsession. Yet we are also trained from the beginning to control this passion, not so that we can be seen as serious or important, but so that we don't fool ourselves. It is so easy to fall in love with an idea to the point that we can convince ourselves that it's true even when the data do not agree. And so we fight to keep ourselves in check – to not get too excited. We're like cars with the gas and brake pedal pushed to the floor; roaring, but also holding ourselves in place. Now and then, we get to take our foot off the brake...and it all comes loose.

Wednesday, June 19, was such a day. It was our fifth deployment of the Medusa. Our fifth time paying out thousands of feet of blue plastic line by hand (on Monday), and our fifth time reeling it slowly in to the happy clicking of the capstan (on Tuesday). It was raining, and Nathan Robinson was trying to pack the boxes with line as fast as possible. When you do something over and over, it can be fun to try to beat the standing record.

Then on Wednesday, Nathan started looking at the downloaded videos. He found the usual shrimp and other small animals that we had been seeing on the first four deployments. And then he saw it, a large tubular animal off on the corner of the screen, looking as if it was hunting the e-jelly. The next short video showed the same thing. Then, in the third video, the tubular animal revealed an enormous set of arms and tentacles coming in to attack the e-jelly.

People quickly gathered around. We knew immediately that it was a squid. It was also big, but because it was coming straight at the camera, it was impossible to tell exactly how big. But big – at least 3 to 3.7 meters (10 to 12 feet) long. Quickly, those who could identify animals of this sort pulled out identification books, slapping them on the chest freezer like a mechanic in a hurry to find the off switch to a runaway engine. Latin names for animals shot out left and right, pictures were pointed to, opinions were tossed out. The two of us that knew squid the best were "70 percent sure" it was a juvenile giant squid, but we couldn't go any further. We needed one of the best squid experts in the world, Michael Vecchione at the NOAA National Marine Fisheries Services - National Systematics Laboratory at the Smithsonian. Unfortunately, we were in the midst of a set of strong squalls, so the Internet was down and we had no way to reach him.

What happened next was something that we truly never expected. About 30 minutes after Nathan first saw the squid on the screen, lightning struck the ship.

A close lightning strike is an impressive experience. One that strikes the metal boat that is your only home, and that you are currently inside of, is scary. It struck a starboard instrumentation antenna only a few feet from the people on the bridge and just a bit further from the people in the remotely operated vehicle (ROV) van on the bow.

Those of us on the main deck immediately ran to the Medusa computer to see if it was destroyed. Losing the most amazing video you've ever seen just 30 minutes later would have been beyond ironic. Luckily the computer was safe. We then ran outside and saw a long vertical column of brown and yellow smoke behind the ship. This, and fragments scattered across the deck, were what remained of the antenna and the instruments that were on it. If that was not enough, the captain then came down to tell us that a waterspout was forming off the port bow. So we ran up to the bridge, feeling that anything was possible.

Things calmed down, we collected the ROV, and checked our internet connections every five seconds until it came back a few hours later. As soon as the Internet was working, we were able to send the movie of the squid to Mike. Heather Judkins, his former student, also followed up with a quick phone call to say "please look at this...Now!" After another painful wait, Mike wrote back to say that he was nearly certain that it was a giant squid, which is about as much as we could hope for. We cheered, talked about how to report it, and then had dinner. With dinner finished, we moved to deploy the Medusa again. It reminded me of the zen phrase:

So we chopped our wood, which in this case meant paying out 610 meters (2,000 feet) of rope, this time in bigger waves and stronger winds, soaking our shoes in saltwater.

A day later, the dust has cleared, and what do we know? We found the squid after only five Medusa deployments, despite the fact that thousands of ROV and submersible dives in the Gulf of Mexico have not done so. This suggests that the animal does not like the bright lights of ROVs and that stealth monitoring of the sort possible with the Medusa can allow us to see what has never been seen before.

We also found it here, only about 100 miles southeast of New Orleans. The old maps often showed serpents at the edge, with the warning "here be monsters." However, the "monsters" are here, in our own backyard. It's not often appreciated, but half of U.S. territory is underwater, extending 200 miles or so from the coast. We are also right at the edge of the Gulf oil field, and only a few miles from the Appomattox Deepwater oil rig, one of the largest on the planet. We see it burning off methane each night at sunset. The creature of our wildest imagination is living not in a pristine deep, but among the heaviest tools of our energy infrastructure.

Most importantly, we did not find a monster. The giant squid is large and certainly unusual from our human perspective, but if the video shows anything of the animal's character, it shows an animal surprised by its mistake, backing off after striking at something that at first must have seemed appealing but was obviously not food.

Our perspective as humans has changed. What were once monsters to be feared are now curious and magnificent creatures that delight. We like to feel that science and exploration has brought about this change, making the world less scary and more wondrous with each new thing we learn.