Assessing the health of coral reefs in the Kingdom of Tonga

Healthy coral reefs provide critical ecosystem services for millions of people globally, but with climate change and anthropogenic stressors, the landscape of these habitats is regularly shifting. The science and conservation community has realized the importance of baseline studies to help track how these precious reef ecosystems are changing. The Khaled bin Sultan Living Oceans Foundation launched the Global Reef Expedition (GRE)—the largest coral reef survey and mapping expedition in history—to conduct much-needed baseline research on the health and resiliency of coral reefs. This cornerstone study used standardized sampling methods to research the ever-dynamic coral reef benthic and fish communities all over the world. The rigorous five-year scientific mission set out to assess the impact of anthropogenic and natural disturbances on reef ecosystems. Now that the field research for the Global Reef Expedition is complete, scientists from the Living Oceans Foundation are releasing their findings. The most recent findings from the Global Reef Expedition come from the Kingdom of Tonga.

In Tonga, the Foundation quantitatively measured and categorized coral reef environments in three island systems, Ha’apai, Vava’u, and around the island of Niuatoputapu. This scientific mission involved 20 participants from numerous organizations around the world, who worked alongside scientists representing the government in Tonga, to gather the highest quality data. They completed more than 500 benthic coral reef and fish surveys on SCUBA, and over 2,200 km2 of satellite imagery was collected and interpreted into high-resolution habitat and bathymetry maps. The ultimate goal of the Foundation’s research in Tonga was to provide scientists, managers, and stakeholders with information and recommendations that could be important for creating successful management strategies for coral reef ecosystems. 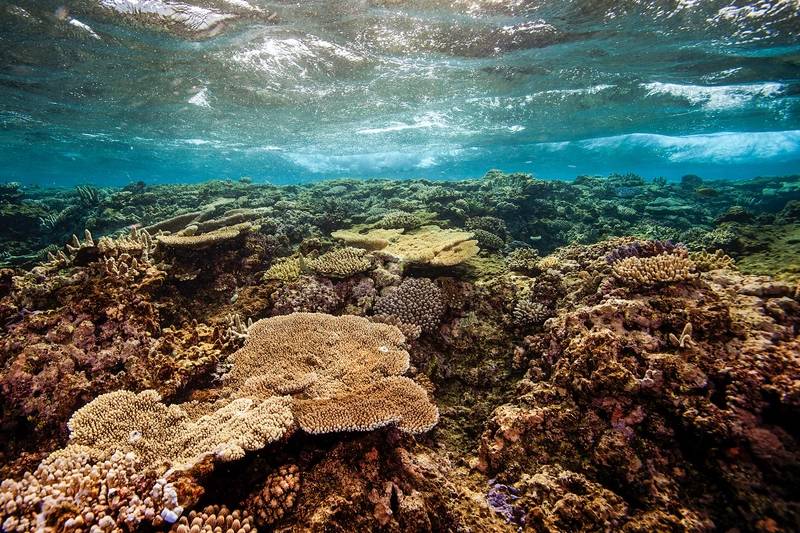 Scientists on the GRE used a combination of quantitative methods, including belt transects, point-intercept transects, and photo quadrats, to assess benthic and fish communities of reefs in Tonga. This standardized collection methodology provides robust data that can be compared across sites locally, regionally, and globally.

The underwater surveys were completed using a ‘rapid reef assessment’ methodology. A rapid reef assessment is a sampling technique that maximizes bottom time (amount of time a person can safely stay at depth below 10 m on SCUBA) to collect as much in situ data as possible.
Coral communities were recorded using the point intercept method to record species of corals, algae, sponges, and other invertebrates. This method required two scientific divers using SCUBA to lay out a 10 m transect line and record the organism and substrate type at every 10 cm mark (total 100 points per transect). Belt transects were used to count and measure reef fish assemblages. This was completed by several scientific divers who would swim 30 meters and record the species of fish and its approximate size.

Perhaps one of the more critical data sets collected was the photographic assessment (photo quadrates) to supplement the point intercept surveys. In this sampling technique, a scientific diver used a 1 m × 1 m quadrat, flipping it over a total of 10 times per transect to capture detailed photographs of a full 1 × 10 m photo transect. Analyzing photos of the underwater landscape required using computer software called Coral Point Count with Excel Extensions (CPCe), which was developed by our partners at Nova Southeastern University’s National Coral Reef Institute (NCRI). The images were imported into the software, where 50 random points were overlaid on each photograph. A scientist then defined the organism and substrate type directly underneath the point. For the Kingdom of Tonga, KSLOF analyzed over 3,000 photos for a total of 41,000 points digitized. Photo transects are an excellent record of what the coral community looks like at a point in time. The data derived from these methods yielded important metrics that quantified how much live coral cover was found on the reefs of Tonga, which is a metric that is linked to the overall health of a coral reef ecosystem. 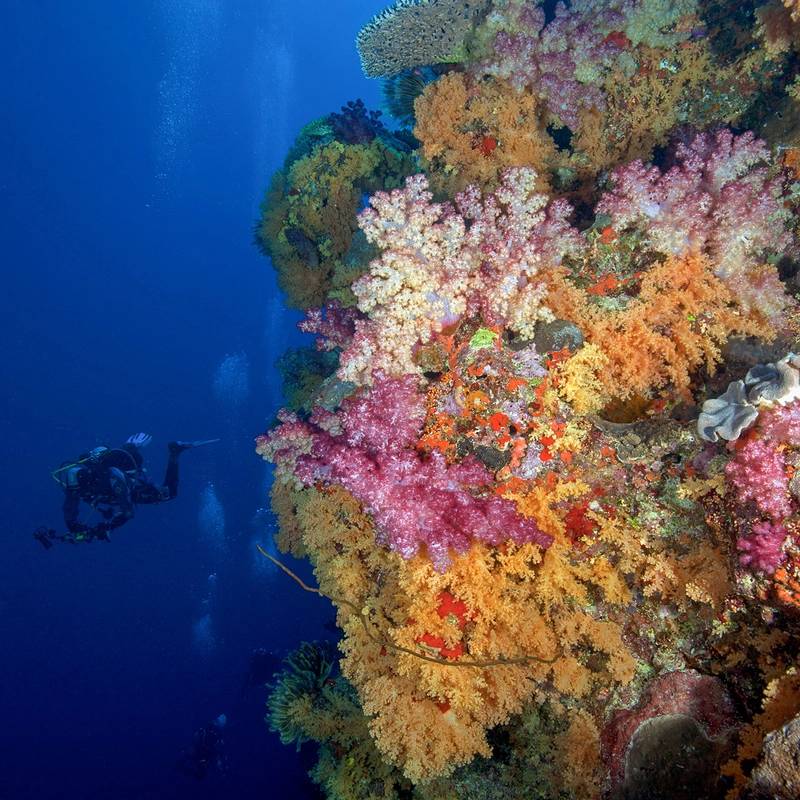 ©Khaled bin Sultan Living Oceans Foundation/Ken Marks
Mapping the Reef
The most novel aspect of the study was the creation of high-resolution habitat and bathymetric maps of Ha’apai, Vava’u, Niuatoputapu. Using multispectral WorldView-2 satellite imagery obtained from DigitalGlobe Inc., in combination with data obtained from aerial surveys and ground-truthing, we created high-resolution maps of the shallow marine environments in Tonga. These maps have been shared with government officials in Tonga and are available to explore on the Khaled bin Sultan Living Oceans Foundation World Web Map Portal (http://maps.lof.org/lof).

To verify the accuracy of these maps, an underwater tethered video camera, called a drop-cam, was used to gather video of the benthic composition at each survey site. At each point, the drop-cam was suspended from the survey boat enabling it to “fly” along the sea floor recording video, geographic position, time, date, heading, and speed. Some of these geo-referenced clips from the drop-cams are available to view on the KSLOF online Map Portal.

Benthic habitat maps are an essential tool in coral reef conservation and marine spatial planning as they provide a snapshot of where reefs are located and give managers an idea of what may be found on the seafloor. The remote sensing data and coral reef maps are useful not only for marine spatial planning, but also as a reference for future research to see how the reefs may change over time. 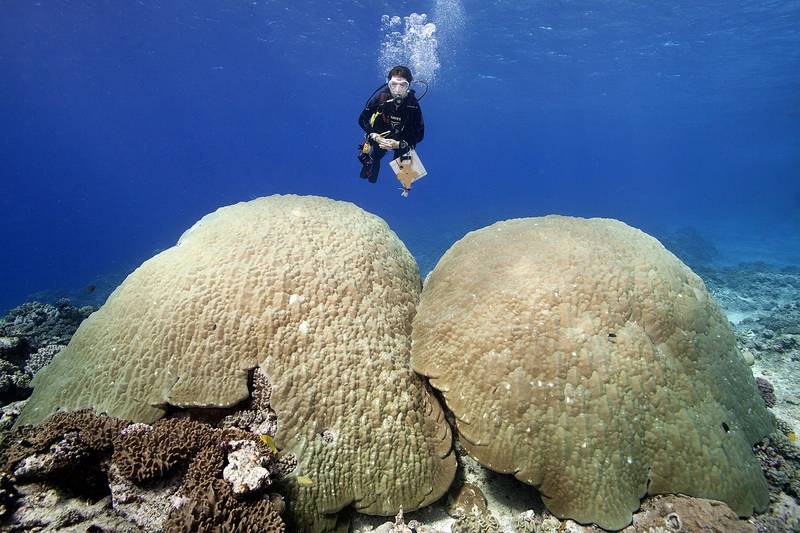 ©Khaled bin Sultan Living Oceans Foundation/Ken MarksThe State of the Reef
With a combination of all these data products, KSLOF scientists were able to develop a unique grading scale that defines the relative health and resilience of the benthic communities for reefs in Tonga. For each survey site visited, the reef was classified as being in “good,” moderate,” or “poor” condition. Based upon all of the data collected on the Global Reef Expedition mission to the Kingdom of Tonga, KSLOF concluded that overall, the reefs in Tonga are moderately healthy. While the corals themselves were thriving in some places, the reef fish and invertebrate communities were in poor condition. Although there were many kinds of fish seen on reefs in Tonga, the fish were small and low on the food chain. Few large and commercially valuable fish remained.
To the credit of The Ministry of Fisheries, the Kingdom of Tonga has done substantial work in establishing conservation areas to protect the country’s marine resources. The Foundation commends these efforts and hopes this information can aid the establishment of additional protection zones and enhance the enforcement of those that already exist by providing a better understanding of the health of reefs around Ha’apai, Vava’u, and Niuatoputapu. In a place like Tonga, where two-thirds of the people rely on marine ecosystems for food and income, it is imperative that in-depth multidisciplinary coral reef assessments such as the GRE are conducted to relay critical information to coral reef managers so they can effectively identify critical habitats for marine conservation. 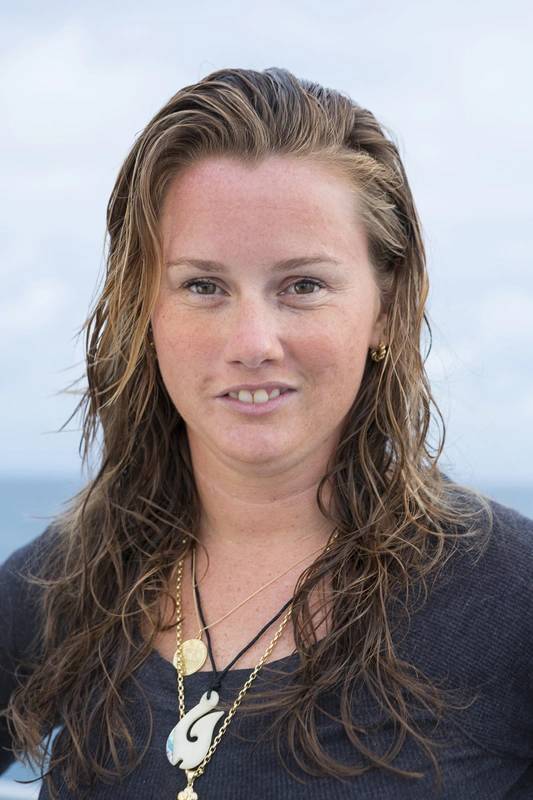 Alexandra Dempsey is the Director of Science Management at the Khaled bin Sultan Living Oceans Foundation, a nonprofit organization that provides science-based solutions to protect and restore ocean health.