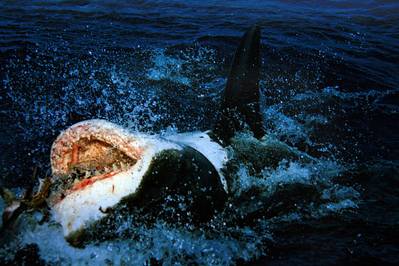 Great white sharks, top predators throughout the world's ocean, grow much slower and live significantly longer than previously thought, according to a new study led by the Woods Hole Oceanographic Institution (WHOI).

“Our results dramatically extend the maximum age and longevity of white sharks compared to earlier studies,” said Li Ling Hamady, MIT/WHOI Joint Program student and lead author of the study. “Understanding longevity of the species, growth rate, age at sexual maturity, and differences in growth between males and females are especially important for sustainable management and conservation efforts.”

For this study, researchers took advantage of radiocarbon produced by thermonuclear device testing done during the 1950s and 1960s. Radiocarbon mixed from the atmosphere into the ocean, and was incorporated into the tissues of marine organisms living during that time period. The rise in radiocarbon gave researchers a specific spot in time pinpointed in the vertebra layers, which can be used as a “time stamp” to help determine the age of an animal.

Full information on the research is available at: http://www.whoi.edu/news-release/LongevityWhiteSharks