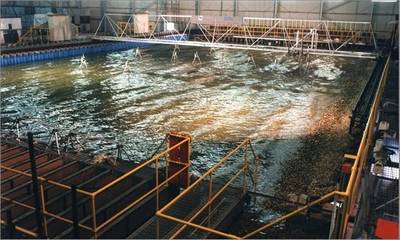 Richard Whitehouse and Richard Simons know first-hand the value of long term collaboration in experimental research. They first worked together in 1991 in the “Hippo Tank” at HR Wallingford looking at forces created on the seabed by waves and currents.

This early work set the theme for much of their subsequent collaboration, later cemented when the Science and Engineering Research Council (SERC) and HR Wallingford jointly funded the UK Coastal Research Facility (UKCRF), opened in November 1993. The unique large laboratory facility was managed by Richard Whitehouse; Richard Simons was the first chair of the Academic User Group representing the interests of university research groups across the UK.

The managed programme of research using the UKCRF, funded initially by the Council, and later by the European Community, set the direction for academic collaboration between many universities, generating benchmark datasets and high class journal publications. Richard Whitehouse is keen to highlight its impact: “It’s fair to say that work centred on the UKCRF has delivered significant advances in our understanding of the complex coastal environment. It also cemented many research partnerships and developed the skills of several generations of young researchers. This has without a doubt been of lasting value to the coastal engineering community in the UK”

Richard Simons adds: “Access to the large facilities at HR Wallingford has allowed coastal engineering research in the UK to extend beyond the physical constraints normally imposed on university facilities. More importantly, working with Richard Whitehouse and his colleagues has provided a practical context and direction to our projects, providing a stimulating environment for early career researchers that brings together the complementary strengths of industry and academe.”