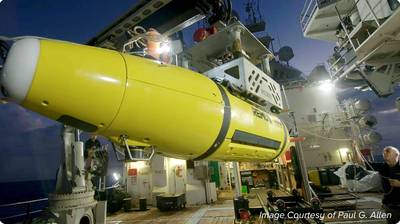 Aiding Allen’s team in the discovery was a 6,000-meter-rated autonomous underwater vehicle (AUV), the REMUS 6000, manufactured by Kongsberg Maritime subsidiary Hydroid Inc., which gathered the sonar data that helped locate the USS Indianapolis, 72 years after it was torpedoed and sunk by the Japanese Navy near the end of World War II.
The wreckage was found on August 19, sitting 5,500 meters below the surface in the Philippine Sea.
“We are honored to have had our REMUS 6000 be part of such a monumental discovery,” said Duane Fotheringham, president of Hydroid. “Paul Allen and his team have given the gift of solace to the survivors and the families of the brave men that lost their lives protecting our country. We are proud to have had our vehicle help solve this decades-long search.”
The REMUS 6000 AUV, which Hydroid calls its “deep-water workhorse,” can be configured to include a wide variety of payloads to meet specific mission requirements. With the ability to navigate up to 22 hours per mission, the REMUS 6000 provides wide area coverage and can be used for commercial, marine research and defense applications.
The REMUS 6000 was also used in the discovery of Air France Flight 447, a passenger flight that crashed in June 2009, as well as in July 2010 to explore the site of the Titanic sinking – both search efforts led by Woods Hole Oceanographic Institution (WHOI).
• Microsoft • Paul Allen • Philippine Sea