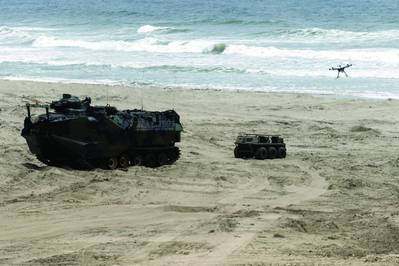 Experimentation during exercises help evaluate the suitability for new technology into tactical operations. In this photo, an unmanned aerial vehicle launches from a tactical transport vehicle during the Ship-to-Shore Maneuver Exploration and Experimentation Advanced Naval Technology Exercise at Marine Corps Base Camp Pendleton, California. The exercise brought industry, academia and Navy researchers together to demonstrate emerging technology and engineering innovations. (U.S. Navy photo by Joh

“Our mission is to support the SBIR community from the first idea to experiment execution by offering beginning-to-end facilitation, mentoring, and training in all aspects of experimentation,” said Scott Bartlett, the DoN SEC program manager,

Naval experimentation can validate or inform concepts of operations, operational plans and doctrine, and ultimately how the Navy and Marine Corps fights. The magnitude and focus of naval experimentation events range from small limited technology demonstrations to large scale naval exercises. “Finding a fit and function where small businesses can insert their technologies and prove their warfighter capability is extremely challenging. In addition to these challenges, small businesses have limited exposure and lack of understanding of naval experimentation processes and are logistically challenged by security and engineering processes encompassing numerous organizations,” said Bartlett.

“We understand all of the options that are available within the huge dynamic that is fleet experimentation, said Chris Dillman, the SEC’s lead planner. “Specifically, we know where we can include SBIR initiatives, and we can mentor our SBIR companies and facilitate their inclusion in appropriate experimentation opportunities. Most of these experimentation events are planned a year in advance, if not more. We can work with our small businesses to help them find the right venue and time to include their technology in existing Navy experimentation events.”

The SEC is developing a guidebook called “The 101 Basics of Experimentation,” tailored for SBIR community, and focused on government sponsors and experimentation venue owners to encourage and help them bring SBIR companies into their experiments.

“SIBRS are one piece of that much bigger puzzle, but they can be one of the most important pieces,” Dillman said.

Exercising experimentation
“We’ve worked very closely with the operating forces, such as the U.S. Fourth Fleet, where we’ve used available assets such as the USNS Spearhead, an expeditionary fast transport (EPF) as a vessel of opportunity to test various unmanned systems and adaptive force packages to provide intelligence, surveillance and reconnaissance,” Dillman said. “We can make those kinds of connections.”

More often, the experimentation occurs in a large planned event. The Navy and Marine Corps are planning an ambitious array of exercises in the months and years ahead, including Trident Warrior, RIMPAC, Sea Dragon, Bold Alligator, Valiant Shield, Valiant Blitz, Large Scale Exercise 2020, to name a few, along with Advanced Naval Technology Exercises (ANTX) and Joint Interagency Field Exercises.

RIMPAC, the biennial Rim of the Pacific Exercise, is the world's largest international maritime warfare exercise, with participation from a number of navies from around the Pacific and beyond. Led by the United States Indo-Pacific Command, RIMPAC is a unique training opportunity that promotes interoperability among Pacific Rim armed forces, as a means of promoting stability in the region to the benefit of all participating nations. The next one will be in 2022.

With ANTX, the Navy and Marine Corps are bringing the warfighter together with the engineer to address an operational problem, “ said Bill Bray, DASN RTD&E. “It could be agile, resilient logistics; or moving data from one place to another; or a specific mission area, such as ship-to-shore maneuver. Working with our warfare centers, we bring in the operators to help us state the problem and look at the technologies that are out there. We then put out an offering to industry to ask them if they think they have technologies that would work and help the warfighter in that particular space, to bring it forward, we’ll assess it, and then we’ll actually take it into the field and run an exercise.”

Bray said ANTX has a low barrier of entry for industry partners. “We provide the environment; we provide the warfighters; and industry and the labs bring the technology. We put the technology in the hands of the Sailors and marines, and we let them run it in the actual environment—with rain, heat, salt water—and we see how it performs.”

“We provide direct feedback on what worked and what didn’t work in the technology.

One upcoming ANTX will focus on naval integration in a contested environment. ANTX NICE 2021 is being held in April at Camp Lejeune, N.C., to explore naval integration in a contested environment. “NSWC Crane is one of the sponsors, and working with Crane, we identified 48 SBIR technologies they were interested in, and came up with four or five that might be a good fit for the ANTX. We’re trying to get the systems command program managers, the prime contractors and the TPOCs to involve their small companies, and want to include them in these experimentation opportunities. In the case of this ANTX, we found both a sponsor and a TPOC that are very interested in bringing this particular SBIR company, Utopia Compressions, into the experiment,” Dillman said. “Utopia Compressions is teaching us the learning process as we go through this effort so we can teach TPOCs how to do this.

Buettner said the JIFX work at NPS is not funded by the basic education mission, but he said it’s a good fit. “We bring in this work through research and working with other partners, such as our sponsor, the DoD Rapid Reaction Technology Office (RRTO). The students and faculty benefit because they participate in it, but the JIFX purpose and mission is to enhance our ability to identify commercial technology that we can adopt or adapt for the warfighter.”

But, Buettner said, JIFX is a good fit at NPS. “According to Buettner, JIFX works in both directions. “We create an environment in which the government can learn about these new and emerging technologies. And we give the technologists in those companies and organizations the chance to learn about what it will take to make that a government program.”

For companies not used to working with the armed forces, there are some big advantages in participating in JIFX. “At JIFX, we brought out a Cyber Vulnerability Assessment Team. The benefit to these companies is that we will assess their technology, and they learn how the government is going to evaluate their technology to make sure it will meet the cyber security guidelines. If they want to sell their technology to the government down the road, they understand at the early prototyping level what it’s going to take to do that. We will access their tech, and they. can see how we look at.”

The JIFX team manages all of the regulatory functions, including permission to fly manned and unmanned aircraft in restricted airspace, to obtaining authority to transmit on certain radio frequencies.”

Buettner said his team generally conducts four events a year (although COVID has had some impact on the schedule), focused on the priorities set by the Navy. “The stakeholders identify technologies that are proposed by companies. If any of the stakeholders believe that technology can address a national security problem, we invite that company out to JIFX.”