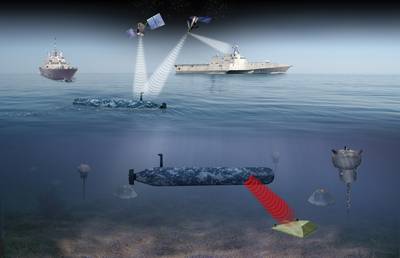 Navy’s new UUV Knifefish is a cutting-edge mine hunter

The U.S. Navy’s Knifefish UUV is a cutting-edge mine hunter, with the ability to find and identify mines, even the most challenging undersea environments. Knifefish is the new Surface Mine Countermeasure (SMCM) Unmanned Undersea Vehicle (UUV), built by General Dynamics Advanced Information Systems of Mcleansville, NC,based upon a Bluefin-21 vehicle from Bluefin Robotics.   The systems helps the Navy’s meet an urgent requirement to reliably detect and identify buried mines in high-clutter environments.
The initial SMCM UUV System being acquired by the Navy includes a pair of Knifefish UUVs, along with launch and recovery and support equipment, as well as the advanced sonar payload provided by the General Dynamics Team.   The plan is for each of the littoral combat ship (LCS) mine countermeasures (MCM) mission packages to contain one Knifefish system, with two of the lithium-ion battery-powered UUVs, as well as associated launch and recovery equipment, a support container, spare parts and support equipment.   The system is designed for use with LCS, but it can also be used from vessels of opportunity.  The Knifefish system recently passed its preliminary design review.
LCS is a relatively small, fast, agile surface combatant designed to address anti-access in the littoral or coastal regions of the world.  The ship can be reconfigured with modularized mission packages for one of three focused mission: anti-submarine warfare, MIW and anti-submarine warfare.
The ship itself—referred to as the seaframe—has core capabilities including navigation; command, control, communications, intelligence, surveillance, launching and retrieving boats, aircraft and unmanned vehicles, and weapons for self-defense. The LCS MIW Mission package will carry systems to search, identify, and neutralize mines in the water column from the near surface, bottom, and the water column. The LCS mission package is comprised of modularized mission systems and support equipment; mission specialists; and support aircraft and crews. As systems are upgraded, or new ones become available, it will be possible to upgrade the mission package without making extensive modifications to the ship.
Knifefish employs a low-frequency broadband synthetic aperture side-scanning sonar to look for mines that are in the water column, or “proud” mines that are resting on the sea floor or partially buried.
“The Knifefish does not use acoustic imagery like most sonars.  The Knifefish Low Frequency Broadband (LFBB) sonar is better able to find buried mines and resolve mine contacts from non-mines in high clutter environments than acoustic imagery sonars,” said Capt. Duane Ashton, a program manager for unmanned maritime systems with the Program Executive Office for the LCS.  “Knifefish provides capability that we don’t have with UUVs today,”
Currently, the Knifefish must be recovered and its data processed and compared against the mine threat library is stored onboard LCS.   The database allows Knifefish to identify just about any kind of mine-like object it could encounter, including virtually all known types of sea mines. Each reflection from an active transmission has unique characteristics that can be identified and classified.   The system will compare any objects it locates with the database.  “It knows what an anchor or a refrigerator looks like, and can rule them out” Ashton says.  “And it knows with a high degree of certainly when it has found a mine-like object.”
The library will be updated as new threat mines are deployed.  “A future product improvement will allow the UUV to perform the mine identification processing on board the vehicle,” Ashton says.
If the LCS mine warfare mission specialists determine that a mine has been located, classified and identified, the mine can be plotted and avoided, or destroyed by using the Airborne Mine Neutralization System or EOD divers.
Each UUV will search its preprogrammed area independently for up to 16 hours, but both can operate simultaneously if desired, Ashton says.
When underway on a mission, the vehicle periodically provides the mission specialists on the LCS host platform with its GPS position and “wellness” update,” by means of a satellite link and a small antenna.  The UUVs do not communicate with each other.
After each mission, Knifefish is designed to be turned around quickly so it can get back in the water for the next assignment, said Tom mason, General Dynamics Advanced Information Systems program manager for Knifefish.  “The UUV will have a subsystem called the Removable Data Storage Module (RDSM) which will contain all of the data recorded by the mission.  The RDSM will be taken from the UUV and downloaded to shipboard processors for post mission analysis.  While the UUV is executing the next mission, the previous mission batteries are recharged and the RDSM prepared for reuse.  To support this requirement, both the RDSM and batteries can be swapped out with ready spares.”
Knifefish is 22 ft. long, 21-in. in diameter, and it weighs 1,700 lbs.
The SMCM UUV started as a Science and Technology (S&T) program run by the Office of Naval Research, has transitioned to an acquisition program.  The investment in S&T has paid off.   Ashton says ONR helped develop the prototypebeing used for testing while the Engineering Development Manufacturing (EDM) systems are being developed.   EDM system testing will be followed by developmental testing, and finally operational testing.
Knifefish LCS developmental testing will occur in FY15, he says.  Operational testing will occur in FY16, and Knifefish could be operational by FY 2017.
General Dynamics Advanced Information Systems is the prime contractor and systems engineering lead, responsible for payload and mission module integration.  The vehicle is provided by Bluefin Robotics.  Ultra Electronics Ocean Systems is providing the low frequency broadband (LFBB) synthetic aperture sonar processing, with design and system engineering support from the Applied Research Laboratory of Penn State University (APL/PSU).
The Naval Sea Systems Command is the contracting activity for the prime contract with General Dynamics Advanced Information Systems.


(As published in the November/December 2012 edition of Marine Technology Reporter - www.marinetechnologiesnews.com)