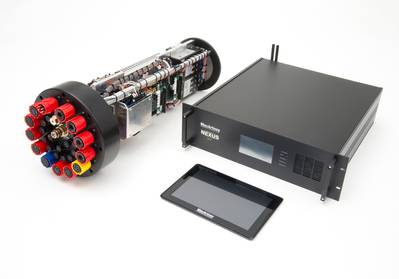 At Ocean Business MacArtney launched the NEXUS MK VII multiplexer, while other recent MacArtney developments, such as the LUXUS wide angle LED, will also be on display. Moreover, stand visitors had the chance learn about the MacArtney range of advanced hydrostatic pressure testing vessels and examine a 3D scale model MERMAC foldable A-Frame representing the company’s new series of cutting-edge LARS solutions.
The star of the show on stand B1 was the MacArtney NEXUS MK VII - a highly versatile HD and standard video, Ethernet, serial and multibeam sonar multiplexer based on Moog Focal 907 telemetric technology. The NEXUS MK VII represents the most advanced MacArtney telemetry system to date. Power switching is software controlled via PC software or using a tablet which is online via LAN or WiFi. Sensor power status, telemetry link, leak alarm etc. is also continuously monitored by the software. Advanced features include programmable fuses and software enabled interface selection. Moreover, the NEXUS MK VII carries all signals over one single mode optical fiber via coarse wavelength division multiplexing, hereby providing a highly efficient link between surface and seabed.
www.macartney.com

(As published in the MAY 2015 edition of Marine Technology Reporter - http://www.marinetechnologynews.com/Magazine)