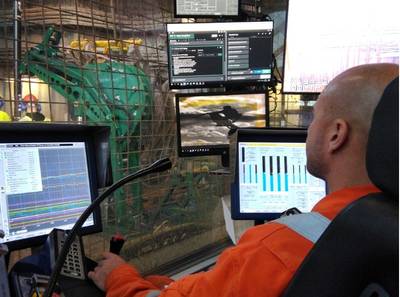 The solution, named RigFlow, has now been segregated into the digitally-focused company named Horizon56 A/S to drive further development and commercialization. Horizon56 will have offices and employees located in Copenhagen, Stavanger and Aberdeen, and support customers globally.

"Horizon56 has been founded as a fully-owned Maersk Drilling subsidiary, with the ambition over time to attract strategic investors to further develop the company and its products and services," Maersk Drilling said.

Esben Thorup, the Managing Director of Horizon56 who previously led the development of RigFlow within Maersk Drilling: "From our dialogues with global oil and gas operators we see that the timing for the RigFlow offering fits well with market trends, and we expect global demand to build over the years to come. We’re thrilled to be part of driving industry digitalization forward, and our product roadmap includes additional exciting solutions that will increase the value creation for operators and contractors even further."

Initially named Drilling Process Platform (DPP), RigFlow has been scoped and developed by Maersk Drilling’s Innovation team from early ideation and validation in 2019.

"Following extensive operational and market research, the solution has been designed, tested, and now deployed across several Maersk Drilling rigs. Scoping and development have been performed in collaboration with digital leaders in the oil and gas sector, including Aker BP and Equinor," Maersk Drilling said.

The purpose of Horizon56 is to develop and provide digital solutions and services to both oil and gas companies and drilling contractors, with a goal to branch out to adjacent markets outside the oil and gas sector, Maersk Drilling said.

Horizon56’s first offering is the RigFlow solution which digitalizes core workflows including the information and data flow between the operator’s well plan and the offshore rig operations, and by doing so, Merck Drilling says, significantly increases efficiency and transparency for both onshore and offshore teams.